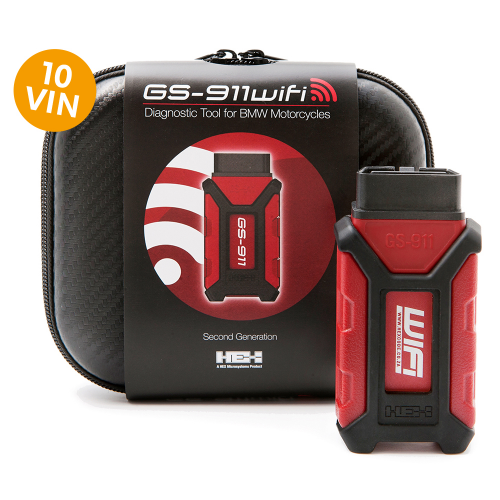 Skip to the beginning of the images gallery
Details

With the GS-911 hardware and software combination, you can safely read out the control units of almost all BMW motorbikes as well as some Husqvarna motorbikes. Starting out as a pure emergency tool for the GS series, both the software and the interfaces now have all the functions required for maintenance and service work. As the GS-911 interfaces are not only small but also lightweight, they can be taken along on trips without any problems.

Enthusiast version
This version allows you to diagnose up to 10 motorbikes with 10 different chassis numbers. This cost-effective version is particularly suitable for newcomers or hobby users.


The GS-911 WIFI OBD2 is compatible not only with BMW models with OBD2 connection but also with older models. The interface sends the vehicle data via a W-LAN network to the associated GS-911 PC software and thus offers you a new dimension of range and convenience. In addition, it is equipped with a USB port so that you can connect it to your PC with the enclosed cable.

For mobile use, a browser-based variant is available to you with the GS-911wifi app. This enables the use of all iOS and Android smartphones as well as tablets that have a W-LAN connection and an internet browser.

The connection to BMW motorbikes with a 10-pin socket is only possible with an adapter.

Functions
- The EMERGENCY functions are integrated directly into the interface and are therefore available via the PC software and the mobile app. They allow you to read and delete fault codes of all control units. You can also display information about the engine control unit and its real-time sensor data.
- The SERVICE functions allow you to perform service resets, calibrations and adjustments. In particular, you can perform output function tests and ABS bleed tests. These applications can be used primarily via the PC software.
- The CLOUD functionality allows a mobile device that has a modern browser and is connected to the HEX Cloud Server to access the SERVICE functions.
- Free UPDATES are available from the manufacturer's download page free of charge for an indefinite period, but for at least 12 months from the date of purchase. They include in particular new functions, additional motorbike models as well as bug fixes.

More Information
Product Attachments
There are currently no downloads available.
Related Products
Check items to add to the cart or
Touratech Copyright © 2020