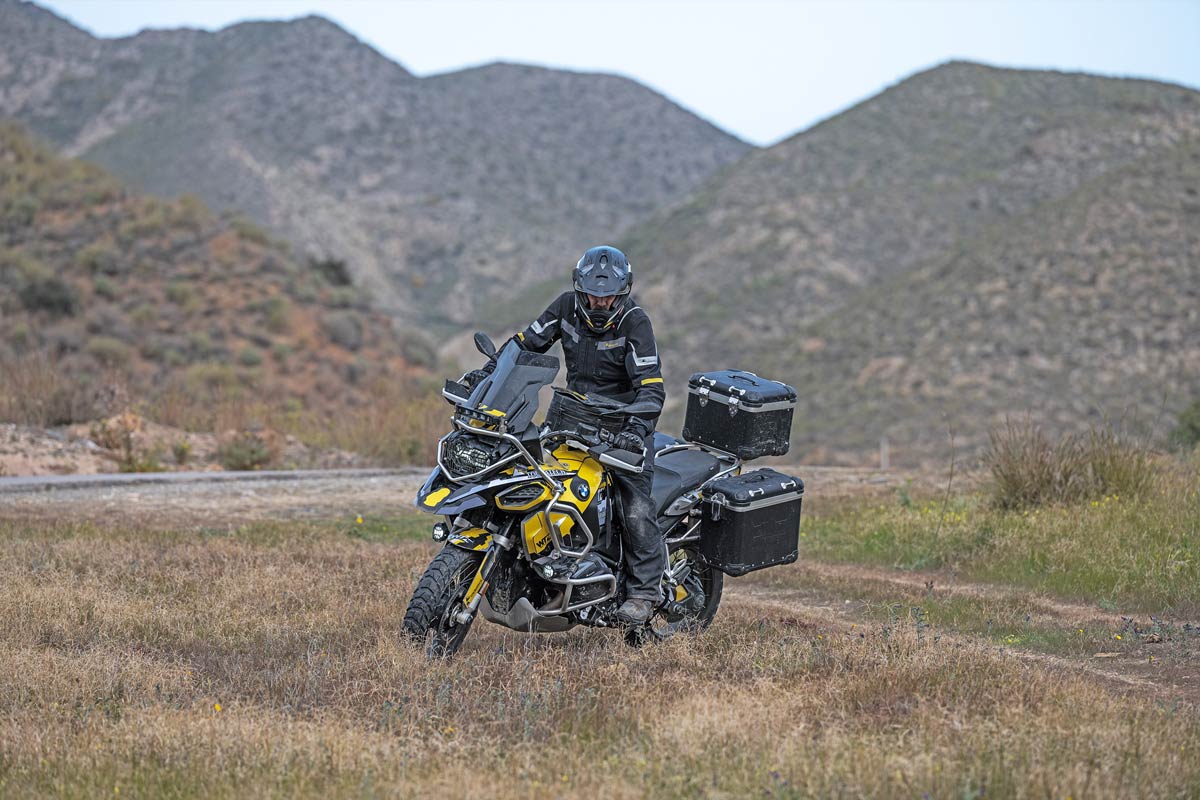 The motorcycle for the photographer was a BMW R 1250 GS Adventure. Why? Even with a huge amount of luggage, the one thing this vehicle conveys above all, when offroad, is stoic serenity.
If you've never been offroad on a 1250 Adventure, you won't believe how easily it meanders along even narrow trails, despite its fat tank. As is also the case with the Boxer's sister model, the bike's low centre of gravity naturally plays a large part in this. But what also gives the rider confidence and transforms a burst of throttle into decisive propulsion in tricky situations is the controllable power delivery and proverbial traction of this unique power machine.
The slightly increased spring travel, compared to the standard model, often gives the Adventure important advantages when it comes to ground clearance. A nominally puny plus of 20 millimetres often makes a huge difference offroad – something we learned to greatly appreciate on our rides over the stony paths of Andalusia. 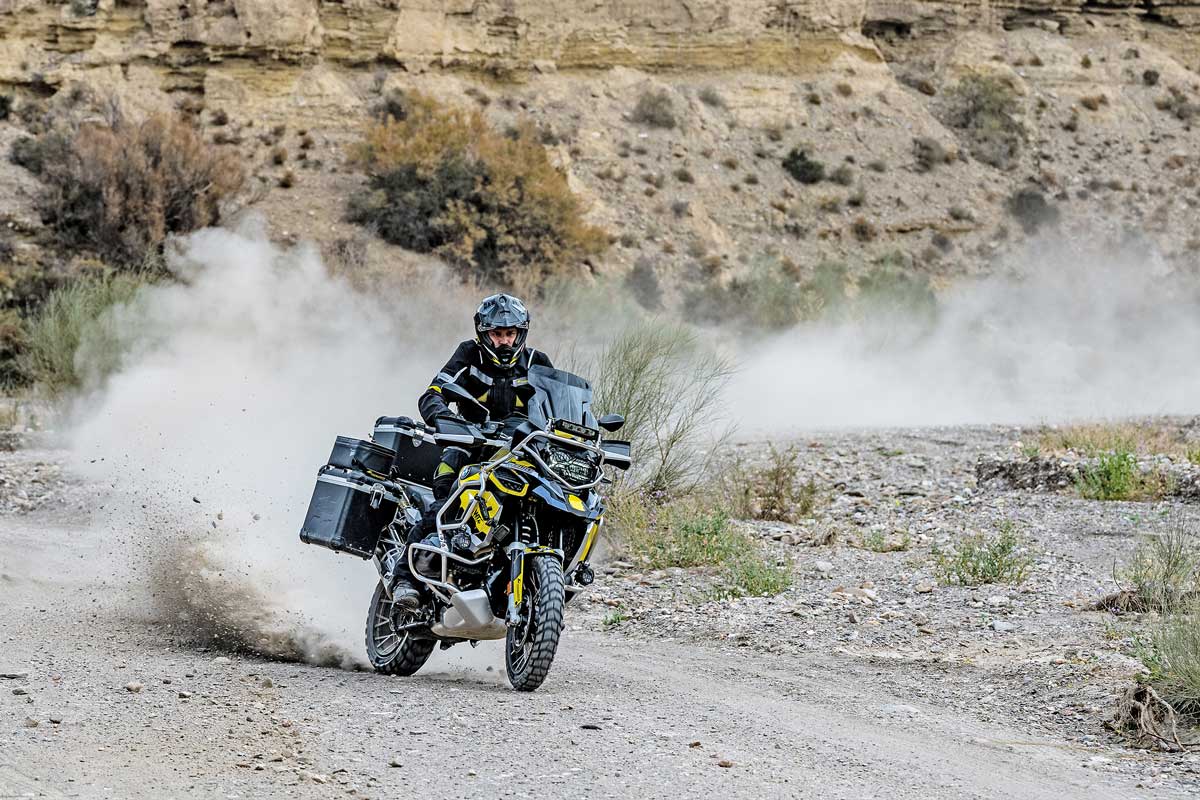 We further upgraded the Adventure's suspension with the DDA / Plug & Travel suspension set from Touratech Suspension. With the semi-active suspension system – with which the original components can easily be replaced – we had additional reserves in extreme situations, but the response to smaller bumps also proved to be significantly enhanced by the electronic suspension elements from Touratech Suspension.
In addition to hand guards and protectors for the cylinders and engine, we'd mounted the mighty Bull Bar, which not only provides excellent protection for the tank and fairing, but also serves as a mount for a Lightbar with additional LED headlights. Night becomes day, even on winding tracks.
Our photographer, Claudius, had stowed his abundant equipment in a ZEGA Evo X special system with two 45-litre aluminium panniers as well as in the ZEGA Evo top case. 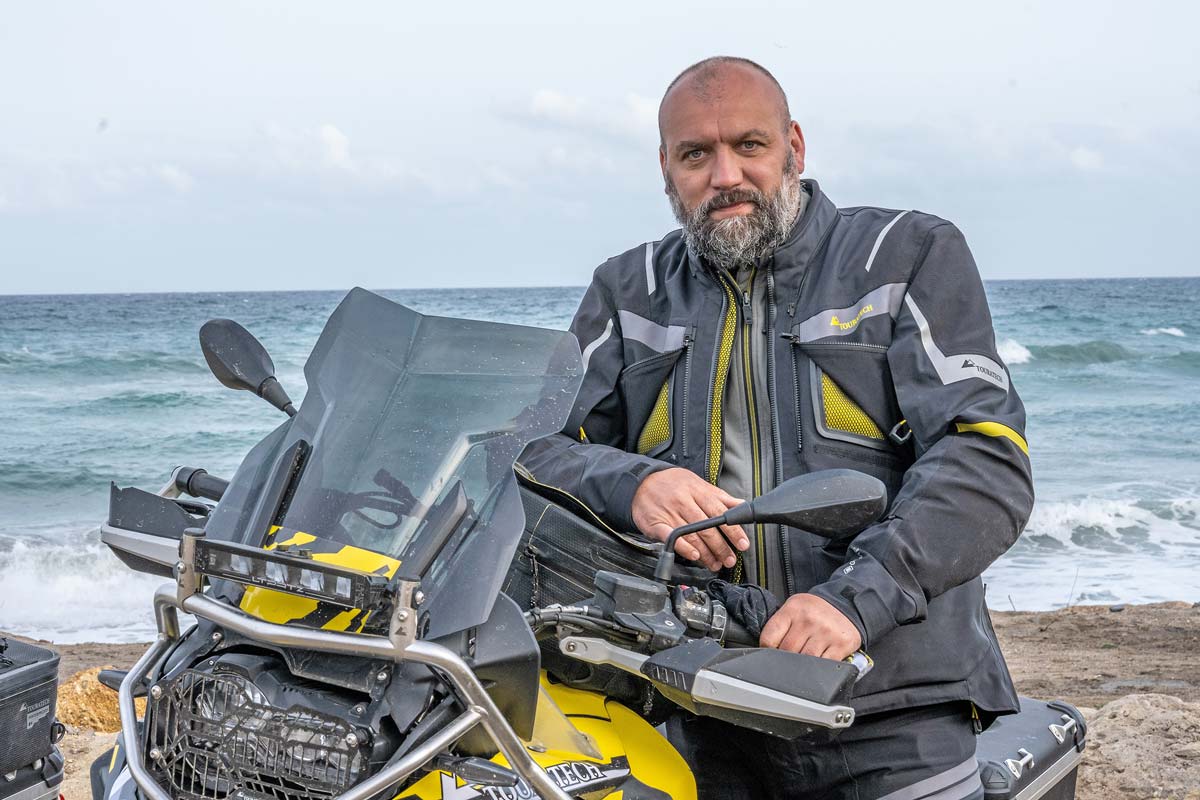 Normally, I need the support of a 4x4 vehicle to shoot offroad with battery studio lights. But not when I have a BMW R 1250 GS Adventure with Touratech suspension and luggage system at my disposal.
This unique combination easily accommodates all my studio, camera and drone equipment without significantly altering the motorcycle's offroad behaviour. There was never a moment when comfort, safety, power reserves or the handling of the bike suffered under the weight of my photo equipment. In addition, the large range as well as the extensive tuning options of the suspension system make the Adventure an excellent companion on adventure trips.