Once all the way around - Great Britain's coast 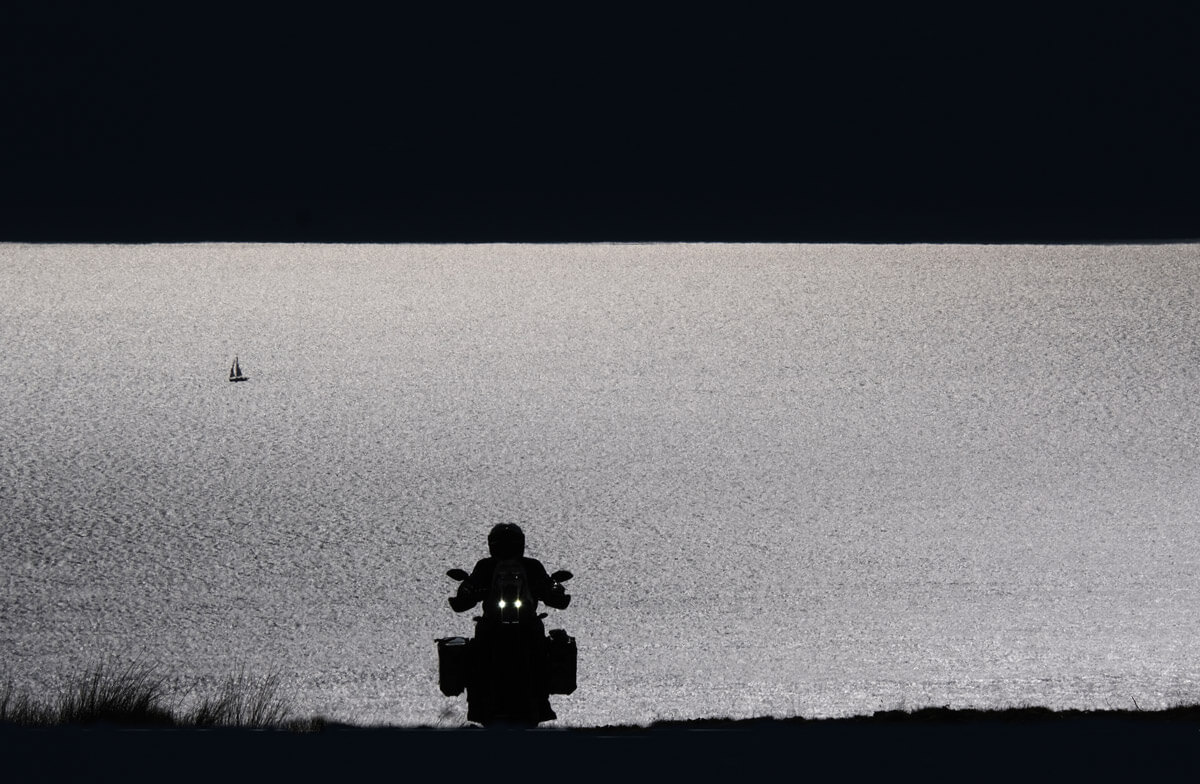 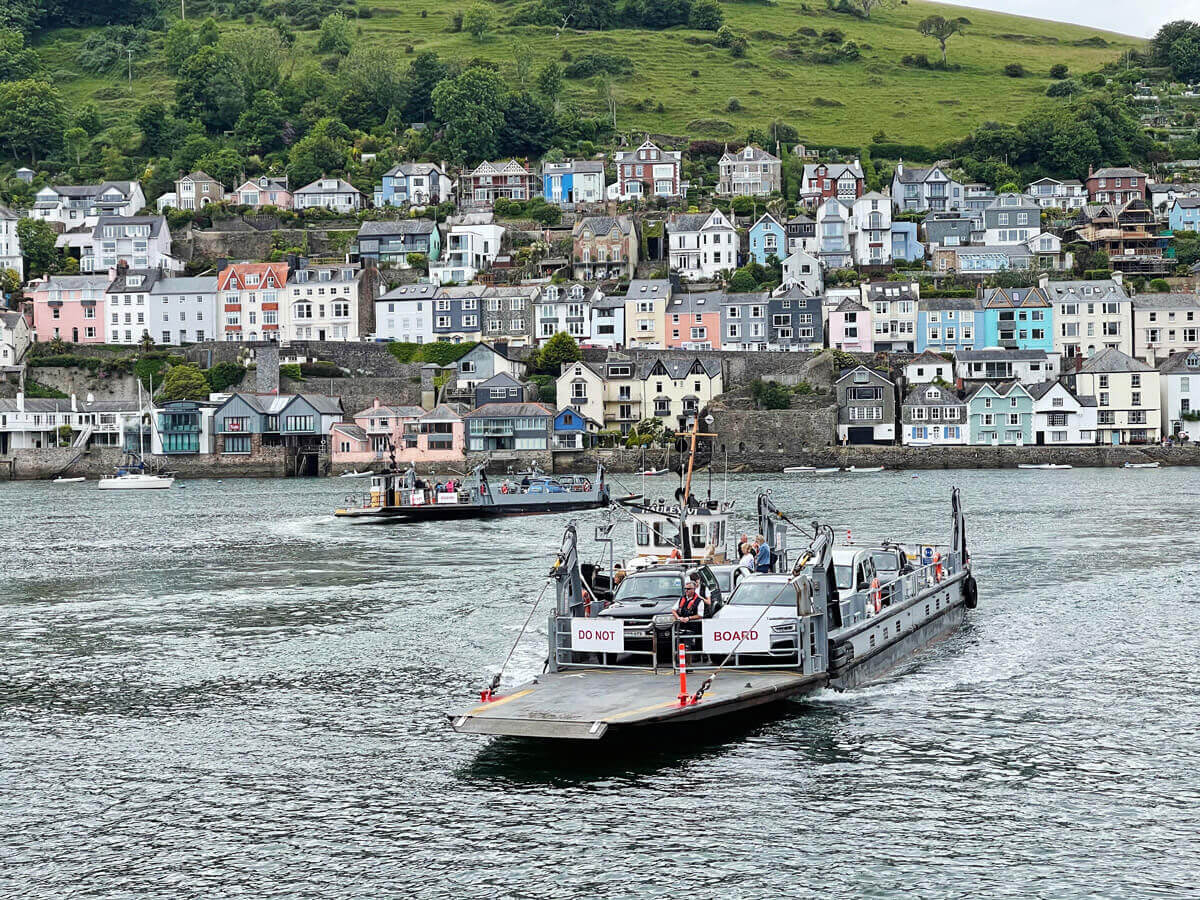 Seen from the side, Britain looks like a witch riding a wild pig: its trotters are in Cornwall, South Wales is its snout, and East Anglia its back, while the witch's face, marked by the rough winds of the Atlantic, scowls towards western Scotland.

Britain's long coastline can be radiant or industrially bleak. Or you can simply see the sea.

Excitedly, I turn the ignition key. I have my camping gear and cameras with me, but no map. I leave my home town of Machynlleth, zip through the hills, past Barmouth to Anglesey, carry on through Llandudno and pass close by the Great Orme. Suddenly there's so much sea that the air feels as pure as freshly dried laundry. The Wirral Peninsula is green and quiet compared to nearby Liverpool.

The great thing about motorcycles is that you can park them wherever you want. When I travel to new places, I feel like a child – I experience something new every day. In the working-class town of Blackpool, for example, the coast looks like a huge amusement park, like a "Coney Island" for the poor. 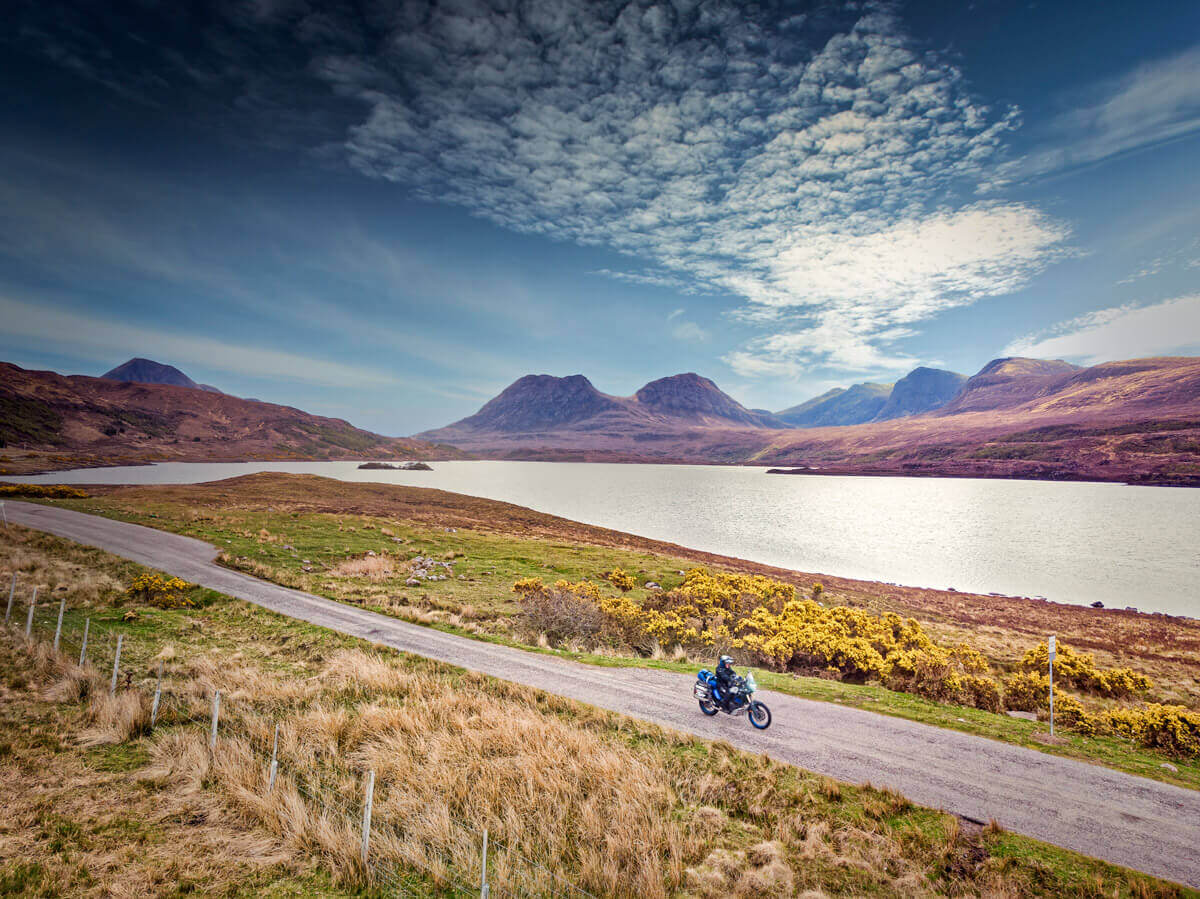 I pitch my tent in Cumbria, where the roads of the Western Lake District begin to undulate. All you need is a motorcycle, a piece of beach, something to eat, and to you the world seems just fine. Being on the road gives you a new perspective in which things simply look good.

I sleep badly in the tent, the air is freezing cold. I just zap past Glasgow, but the shores of Loch Lomond remind me that nature is often best seen from a motorcycle. In a car, you can't immerse yourself in experiences the way you can on a bike. 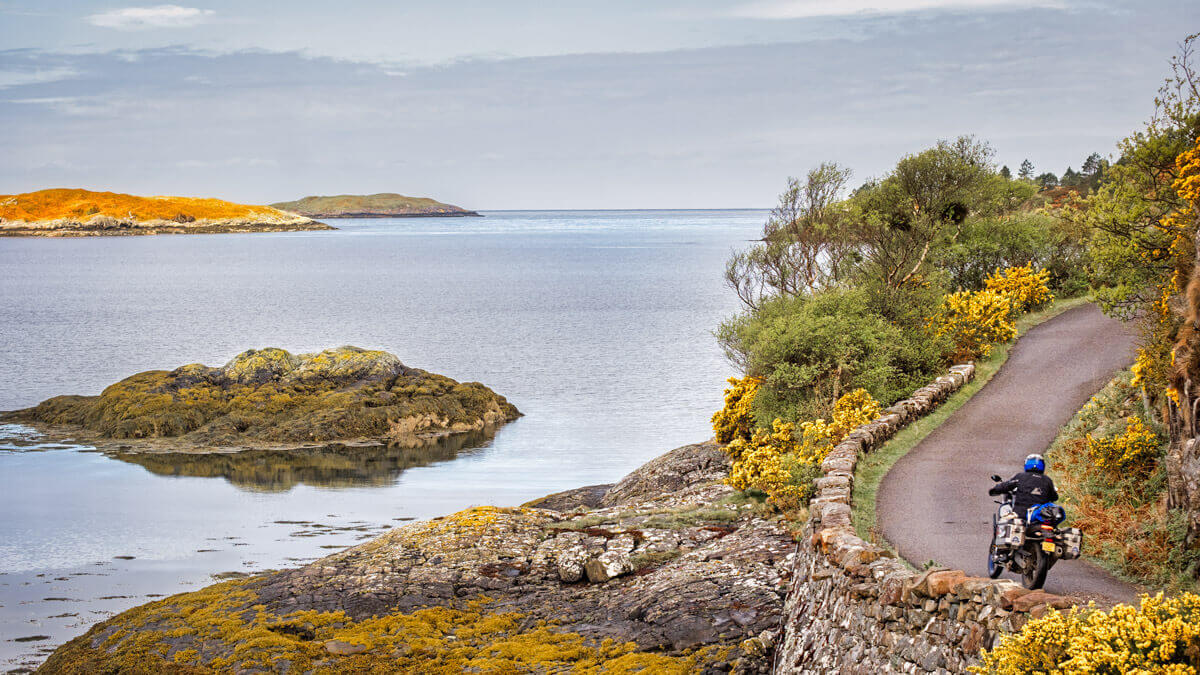 On the way to the village of Lochinver on the North Coast 500 route, along the west coast of Scotland

After a while, I ride over the Skye Bridge to Portree, with its harbour and cafés; I'm greeted by sensationally warm air and stop for a drink.

My motorcycle roars up the Bealach na Bà. There's a dark majesty to the climb up the mountains and the higher I go, the more my whole body trembles until I finally reach the top before heading back down to Applecross. 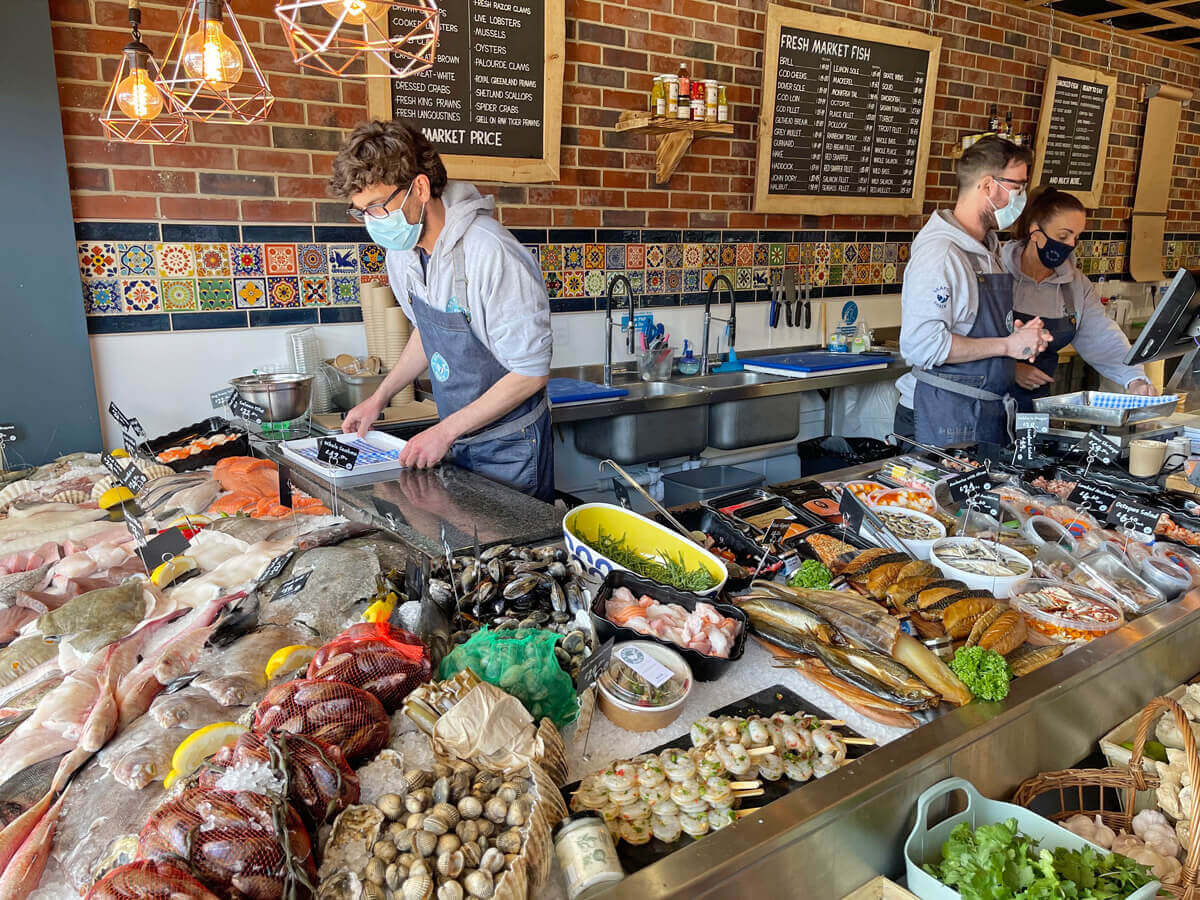 Seafood Shop on the Wirral Peninsula near Birkenhead

A balmy wind blows around the rugged hills by Loch Eriboll on Scotland's north coast, where cottages are so isolated they even have their own postcodes. The views are cinematic, and the sparse population, indeed the absence of people, gives the landscape an eerie look - more memorable than anywhere else in Britain.

Typical section of the Scottish coast

The road, just one car wide, winds along the shore of a loch or the sea, its colour a sombre grey. A strong headwind forces me to steer against it. Trees rush past as I ride harder into the curves. The rain falls thickly and covers the flat valley floor east of Durness like a blanket.

It's OK to have it all, but maybe not all at once. Driving down the isthmus of Tongue, you have to concentrate a lot on riding because of the narrow road, and at the same time there's the taste of the sea in your mouth. 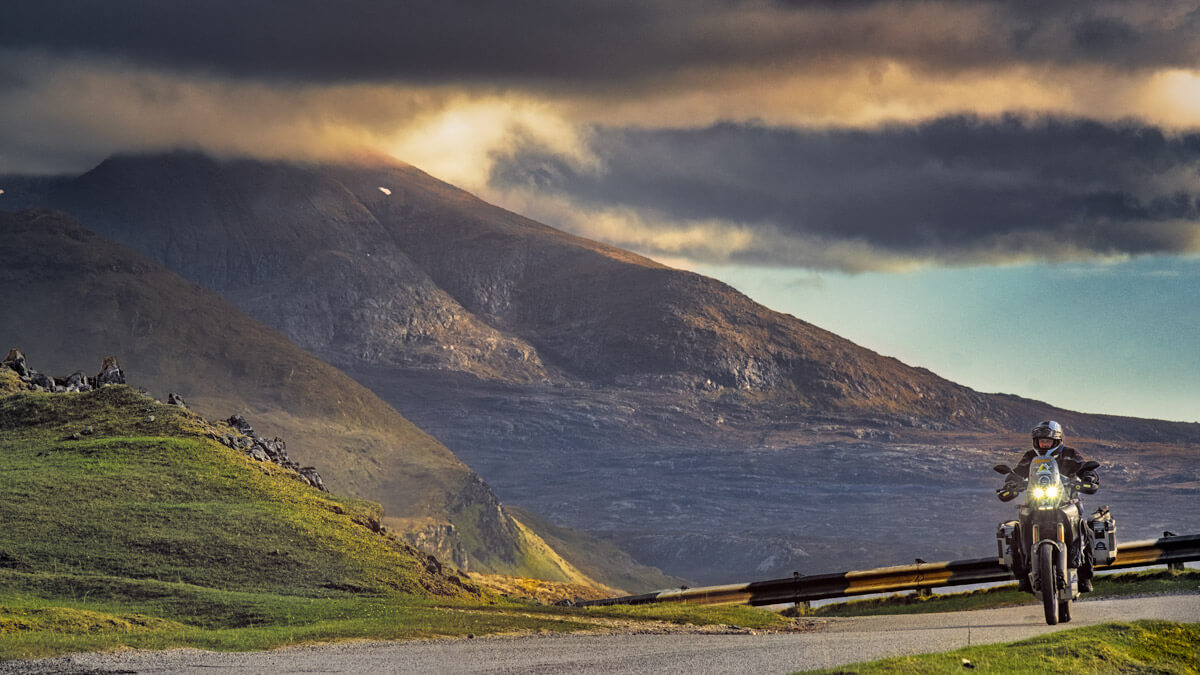 On the way to Durness, in the north-west corner of Scotland

In Bettyhill, a café sign leads me to a small village just a few fields away, with a few houses and a view over to the Orkney islands. The tops of the conifers move against the background of strong earth colours, giving the land its feeling of expanse. The inside of the shop looks cosy – a fact which is underlined by the shelves full of rare whisky and gin.

John O'Groats is freezing cold, wet, windy and dirty – and empty. In the Highlands, the cows stand still, like silhouettes, on rocky ledges. But here I'm riding my bike to feel alive. I want to feel all that can be felt. I want to feel tired today, and again tomorrow. I want to cook my food by the roadside and sleep in my tent – wrapped up against strong winds and the rain. Taking the back roads, I ride slowly along the Northumbrian coast to the port of Hull. 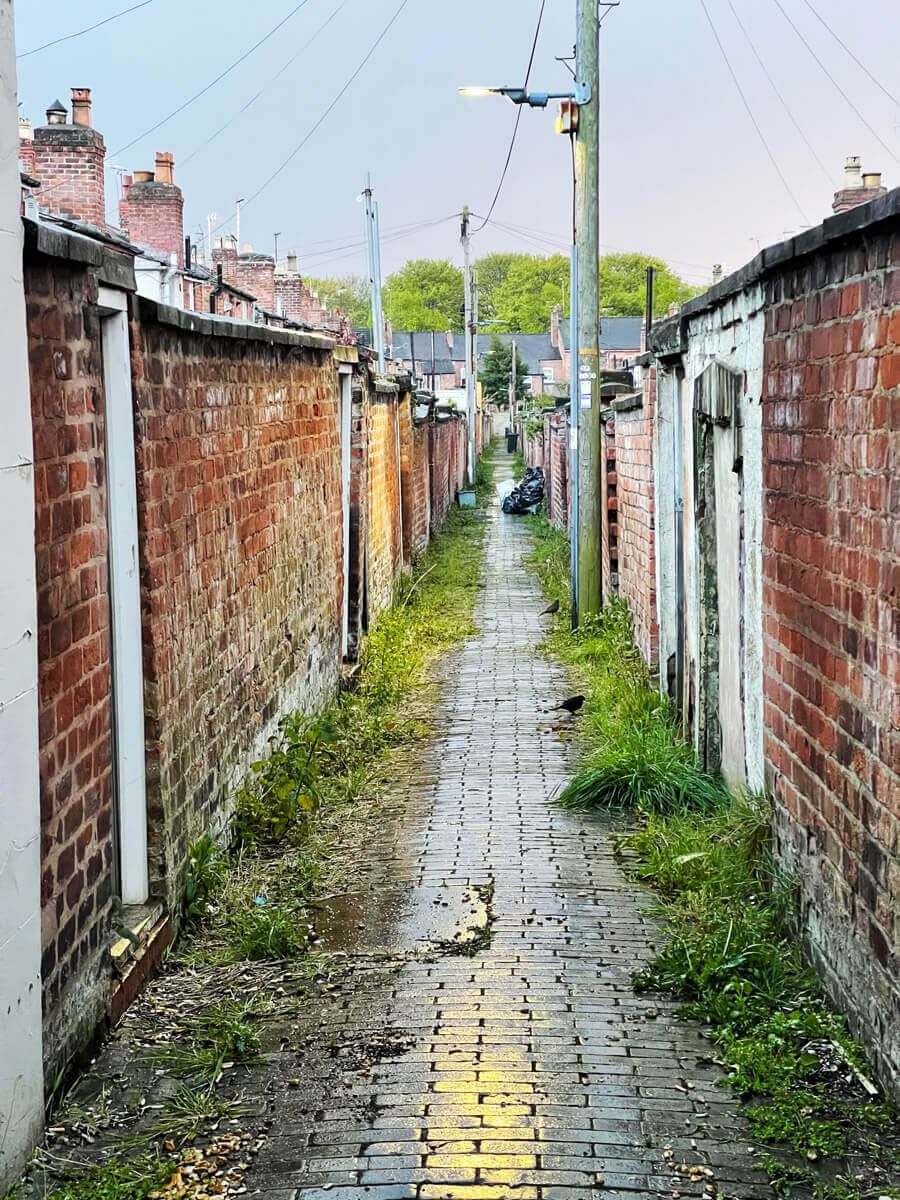 Side street in Chester, north-west England (1.)

When the Humber Bridge was built, the towers were connected with the world's longest single bridge arch. It's two kilometres from shore to shore, and now, on a damp night over the estuary, I'm fighting a stiff crosswind that blows the cold up from a stormy sea.

Around the Wash to Norfolk, the route is straight, with 90-degree bends that look like they were planned in a maths class, past barley, maize and wheat. My bike follows its course under the wide sky, the "parallel twin" roaring. The great Valentino Rossi once said that riding a motorcycle is like an art form, something you do because you have this feeling within. So I'm happiest if I can arrive at a new place every night of my life.

Britain is actually "small Britain", if you take its size into consideration. As a nation we have our own sense of distance, which comes from the idea of Britain being a desert island in the vastness of the empty sea – and being on the coast confirms this traditional view. 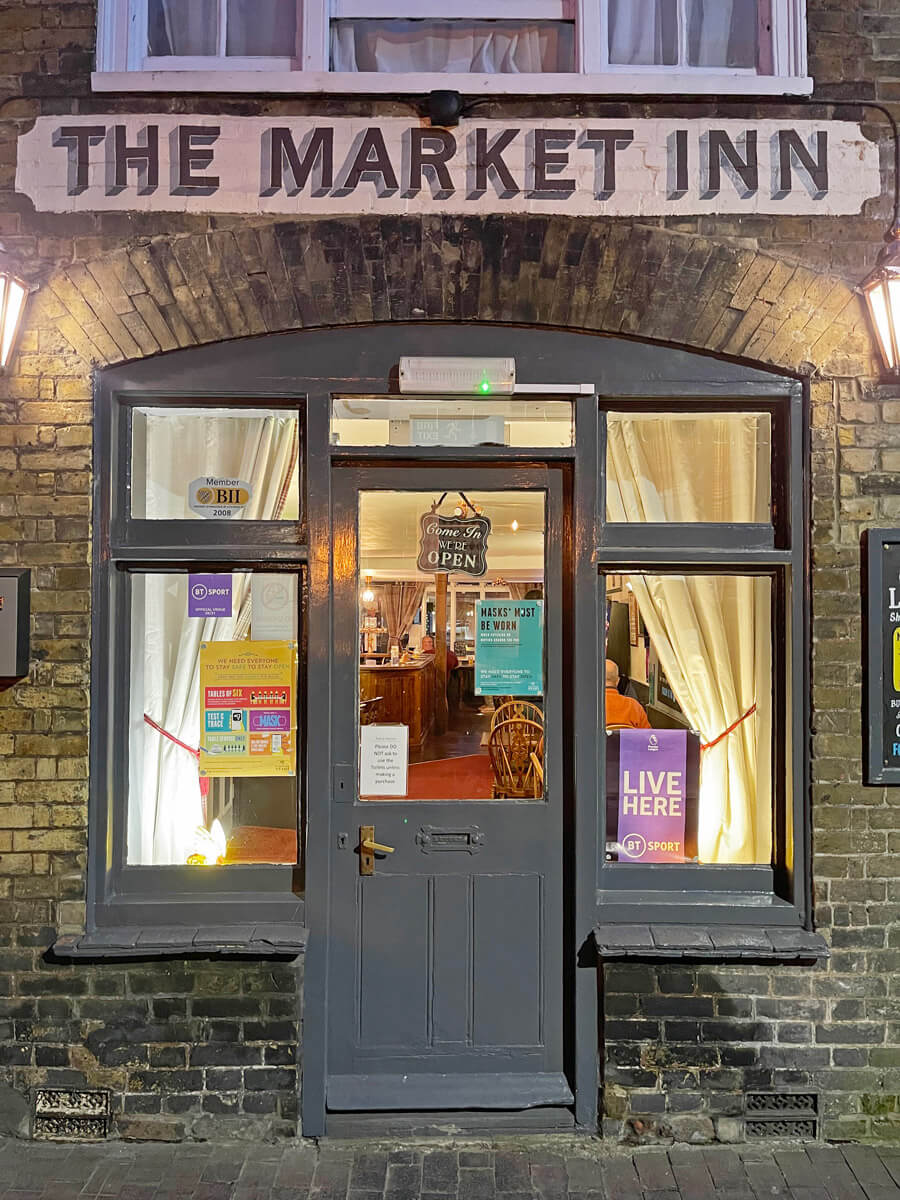 Cosy pub in Sandwich in the county of Kent

England is a flat, grey, muddy land on an island that summer only visits now and then. It's not a Tuscan dream, but when the warm weather does actually arrive, the green and blue colours and vibrant lushness remind me of a well-stocked garden centre. In the south, some parts of the coast are incredibly beautiful, but progress is slow because there are too many cars for the small amount of space available. In times of Covid, no one travels far. Hordes of people – like me – are trying to get back in touch and be carefree once again.

While the south of Devon is an extraordinarily beautiful area, a pretty oasis, but limited by its geography, there is sadly hardly any part that has not been subdivided and taken possession of. As the road only rejoins the coast after Plymouth, I ride via Looe, Fowey and Lizard Point to Land's End.

I remember that, a few years ago, the coast of Britain was dull, run down and neglected, a strange place for a getaway. Devon has retained that certain shabby chic, slightly scruffy, superficial sheen, but is electrifying on a sunny day.

Sometimes adventures are about riding, sometimes they're about the weather or maybe about indecision, but for me, riding a motorcycle always means looking for places and people that are interesting enough to provide inspiration for a whole week. I roll through the narrow streets, the hedges get lower, the traffic thinner. I reach the coast again at the Bristol Channel, where I stay with my new buddy Dr Paddy Hook, a brilliant former technician for motorcycle racing legend Kevin Schwantz. He calls his latest motorcycle design "No Compromise - The Spirit of Semtex" and left it without a coating of paint because, he said, paint was too heavy. 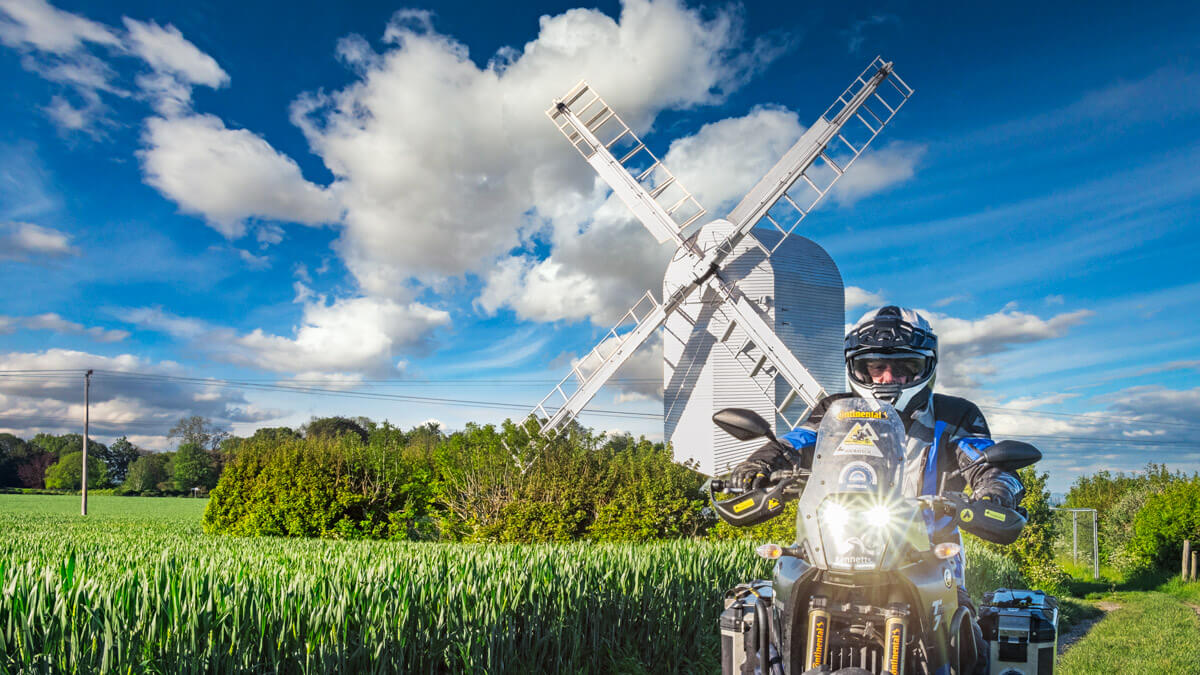 The famous windmill at Chillenden, Kent

In the rain, the industrial town of Port Talbot, is a refreshing change from the splendour of the sand and the sea. Places like Barrow in the Lake District, the hinterland of Dundee, Immingham, and all the way over to Merthyr, with their cheap pubs, Indian restaurants and nail salons – can these places be seen as the opposite of what you imagine when you think of the coast of Britain?

I'm almost home with my nippy Ténéré 700, and I'm on a road where zipping through at high speed is like playing Russian roulette. High hedges prevent fast riding. This coastal road is not where you want to be chasing your rev counter into the red zone. Instead, it connects mostly unknown villages with larger towns that sell things you can use to dig holes on the beach, or blow up to go floating around on the sea. Then add fish & chips and a lot of sunburnt people – it's my last day. I am exhausted. I can't get enough. Can I do this again before dinner? 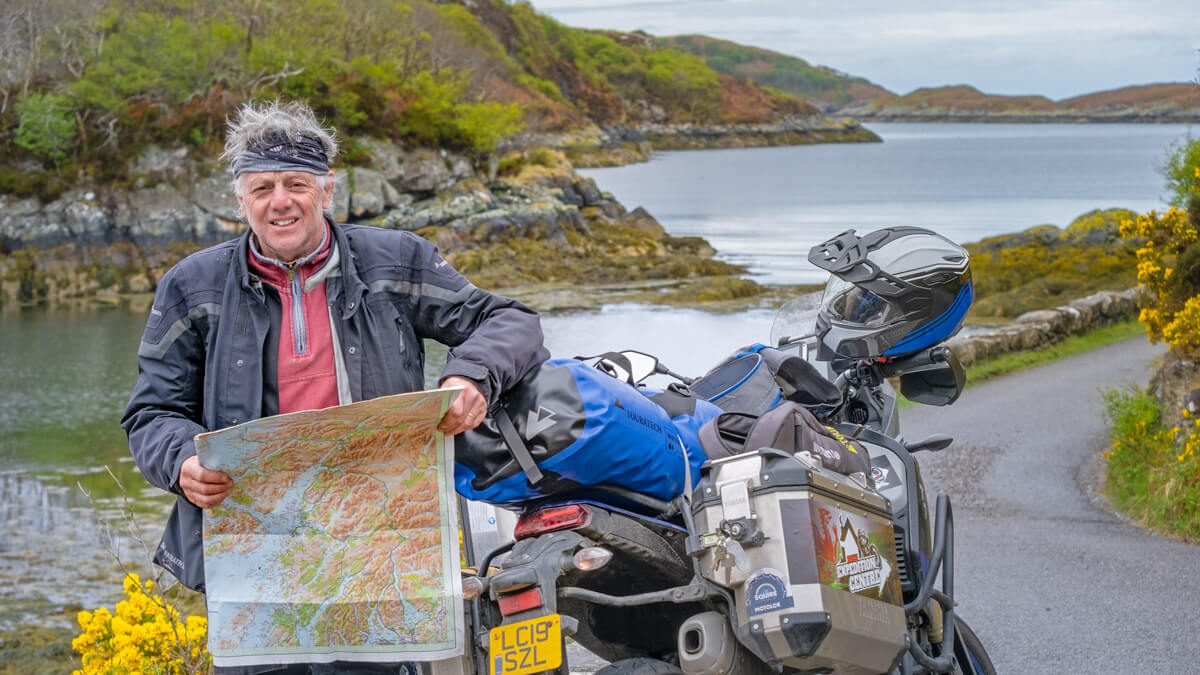 Nick Sanders is a professional motorcycle adventurer. He became famous through his trips around the world. He has already ridden his motorcycle around the globe seven times and, having done it in 19 days, is the the record holder.

Nick has ridden around the entire American continent eight times as well, and again holds the record for the second fastest ride – in 21 days and 8 hours. After riding a million miles on his motorcycle and cycling around the world twice, he was awarded an MBE in the 2020 Queens Birthday Honours list alongside Joey Dunlop, Jonathan Rea and Carl Fogarty.

In his home town of Machynlleth, Nick regularly hosts the MACH Festival, a large party with high-quality live music for motorcycle enthusiasts. The next one is scheduled for 25 to 28 August 2022.

Further information can be found at www.nicksanders.com 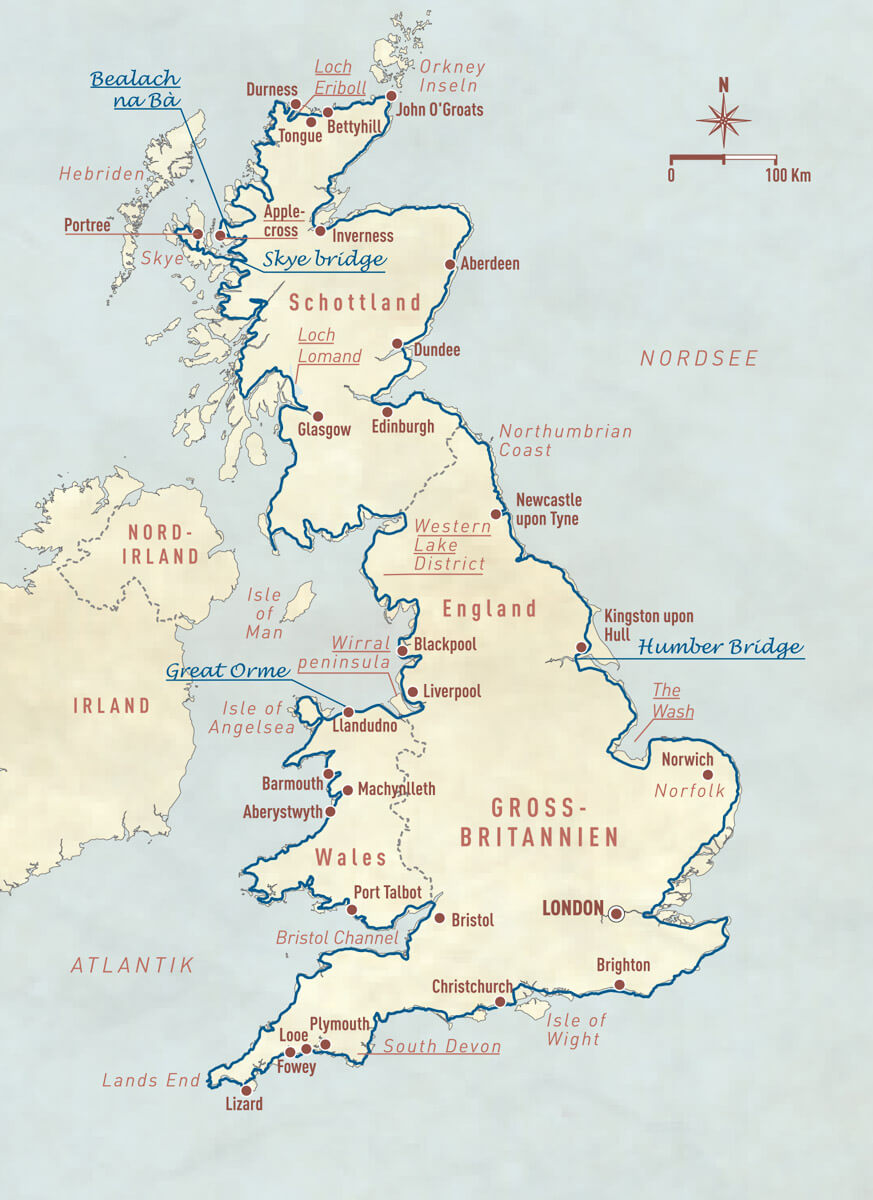