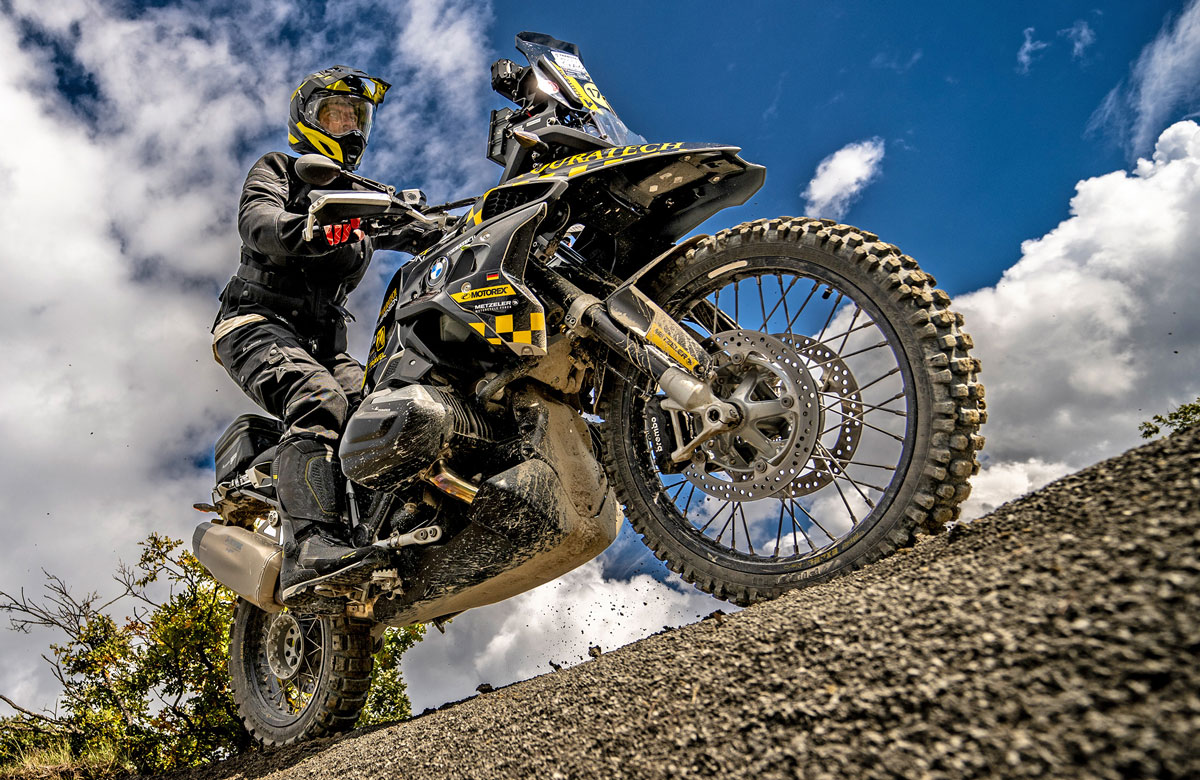 Extremely versatile and really good in all disciplines - with this recipe for success, the current generation of the Boxer-GS has dominated the top class of touring enduros for over 40 years. The Touratech Suspension Team and the developers at Touratech have now been tempted to turn the generalist into a specialist and to exploit the maximum off-road potential of the current GS. The result: the spectacular Touratech R 1250 GS RR.

Indispensable for directional stability in difficult terrain, a 21-inch front wheel forms the heart of this radical off-road conversion. The Touratech team with Lars Würdemann as suspension specialist stored for this a high-strength Excel rim with the original hub. "Since we spoke inwards - as on a Sportenduro - and the nipples had to sit on the rim, we needed special adapters for the hub. That was a lot of work, but the enormous stiffness of the 21-inch front wheel proved us right," says Würdemann, describing the challenges.

Numerous other parts from the extensive Touratech product range round off the off-road prototype. The adjustable shift and foot brake levers allow perfect adaptation to the standing driving style. Folding levers for the front brake and clutch minimize the risk of breakage, and the handlebar fittings are given solid protection by the high-strength aluminium brackets of the Defensa protectors.

To achieve the smallest possible overall width for narrow passages, the off-road pros dispensed the engine guard and instead relied on the Touratech aluminium valve cover protectors. The underside of the Boxer is protected from damage by the "Rally" engine guard made of hydroformed aluminium.

After extensive testing by the suspension team and use in scouting the Adventure Country Tracks UK (ACT UK) by Touratech CMO Martin Wickert, Touratech put the R 1250 GS RR in the hands of Kevin Gallas. The hard enduro specialist, who has taken out top placings on numerous extreme enduros and has also successfully conquered the legendary Erzberg, took part in the Transitalia Marathon (TIM) with the conversion.

For the tricky navigation through the mountains of the Apennines, the RR received a navigation tower equipped with roadbook holder, tripmaster and GPS device. Kevin was more than enthusiastic about the performance of the GS conversion: "In the off-road area, the front wheel and the road grip were great to assess, and you had great reserves even at high speeds and jumps, as well as on off-road sections and in stone fields," sums up the enduro crack.

Valuable findings for the series

The Touratech R 1250 GS RR will remain an unsellable one-off that will be used at selected events. The experience gained will benefit Touratech customers in the form of the semi-active suspension elements in the Touratech Suspension Plug & Travel EVO range and numerous other products available immediately.