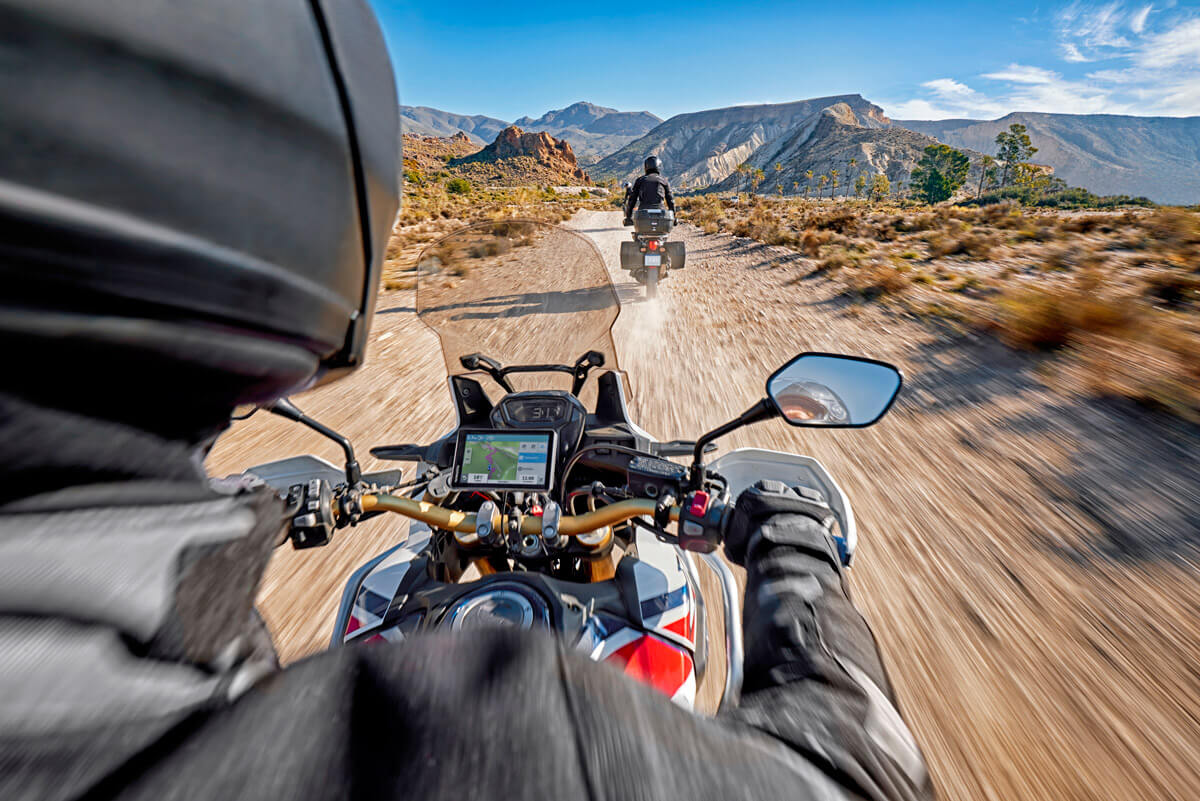 For a fair number of motorcycle travellers, planning a tour is almost as enjoyable as riding the route later. However, routes with a high offroad component in particular are not so easy to put together from your desk at home. On the one hand, there is usually a lack of sufficiently detailed digital map material, and on the other, it is often not clear whether the routes shown on maps or satellite images are actually passable. It is only possible to plan a longer contiguous tour off the beaten track if intensive scouting on site has been carried out in advance. But most adventure riders simply don't have the time or the knowledge of the locality that would be required.

Today, there are several projects that have taken on the task of scouting offroad tours for the community and sharing the corresponding data - and that free of charge. While more and more Backcountry Discovery Routes are being scouted out in the United States, the association Adventure Country Tracks e.V. has made it its business to track down and carefully document the last offroad routes in Europe. There are now five Adventure Country Tracks that cross Portugal, Greece, Romania, Italy and the Pyrenees. Anyone interested can download comprehensive travel information and the GPS track from the association's website.

But how do you handle the data? What is the difference between track and route navigation? And to begin with, which device is suitable for navigation with tracks? The answers to these questions are as follows:

Let's start with the selection of the appropriate device. Tracks can be displayed on all current motorcycle navigation systems. However, apart from outdoor devices such as the Garmin Montana or the GPSMAP series from the American manufacturer, only the Zumo XT (since the software update) and the new Tread are capable of track navigation. Popular motorcycle devices such as the Garmin Zumo 390 or TomTom Rider are not suitable for track navigation.

GPS data provided by tour portals, or offers such as Adventure Country Tracks (ACT), are usually available as what are known as .gpx files. These are either loaded directly to the navigation device, which is also possible from a smartphone or tablet, or first prepared on a computer.

A planning programme (e.g. Garmin BaseCamp) enables the validation of the data and makes it possible to add intermediate destinations in line with individual interests. In addition to the tracks, the .gpx file for scouted routes often shows valuable waypoints along the route already, such as places of interest, accommodation or petrol stations.

Generally, uploading a .gpx file to the GPS device is problem-free. For very long tracks with a great many track points, however, it may make sense to split the track into several sections – especially if you are considering converting the track into a route. Otherwise, there may be problems with the calculation on the device. 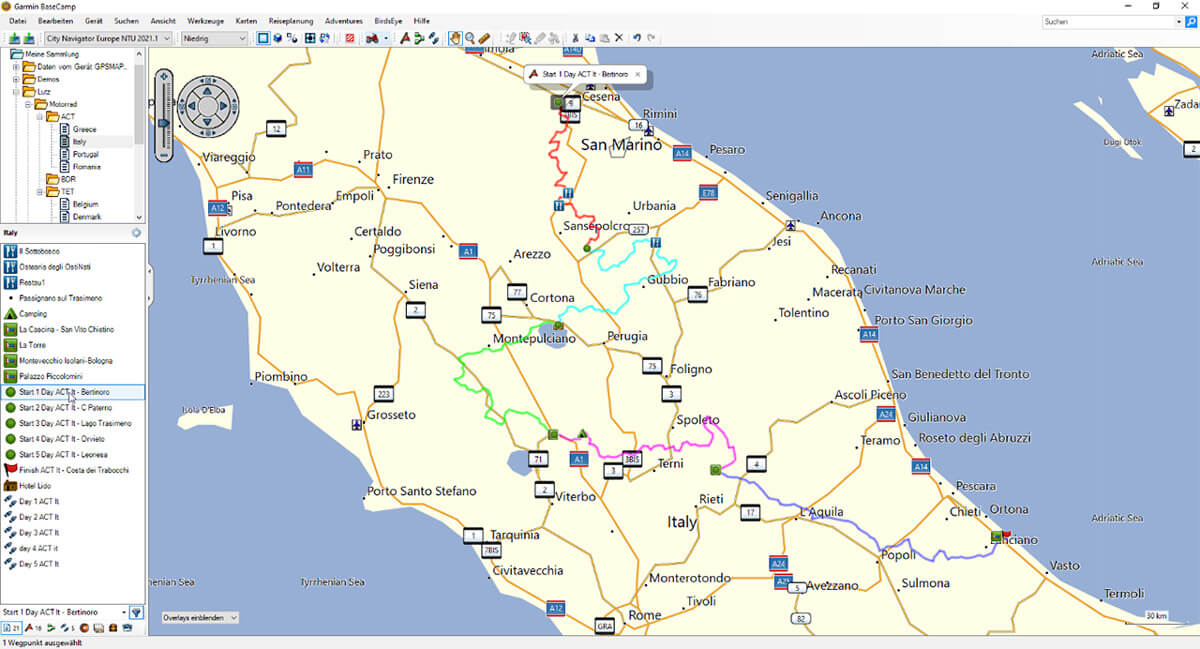 ACT Italy displayed in BaseCamp. On the map, individual sections are in colour. Tracks and waypoints from the download are in the list on the left. 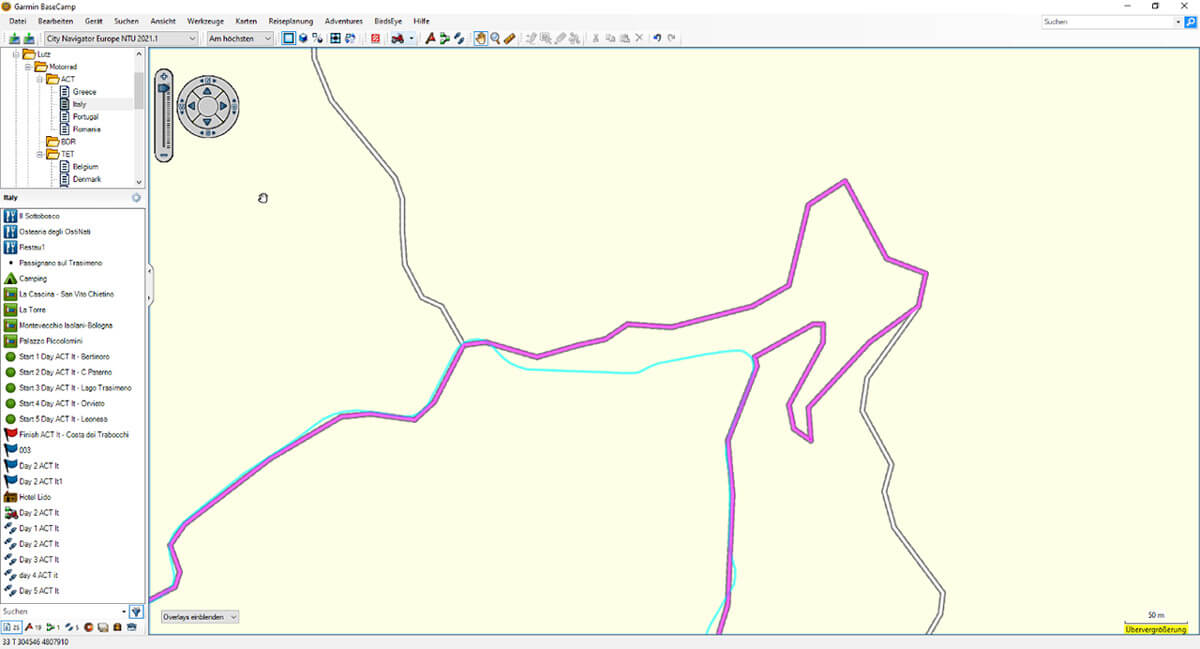 Difference between track and route in BaseCamp. The track (turquoise) has no paths/roads as a basis but can still be displayed and navigated. When converting to a route (magenta), the section (no path/road in the map) cannot be calculated and a change of the route is implemented via the path/road network stored in the map.

In route navigation, the route is calculated using the map material on the navigation device. The calculation is based on the parameters in the navigation settings (fastest/shortest/winding route, avoidances) and the information stored in the installed map. Routes are dynamic and can adapt, depending on the setting. Keyword: Recalculation.

The route adapts and, if necessary, is simply recalculated if you deviate from your original route. Turn-by-turn directions are generated for the route, which significantly increase orientation and ease of navigation.

Route calculation can only be done for mapped paths/roads. If a passable route is not available on the map, an alternative one is calculated and the route changes. 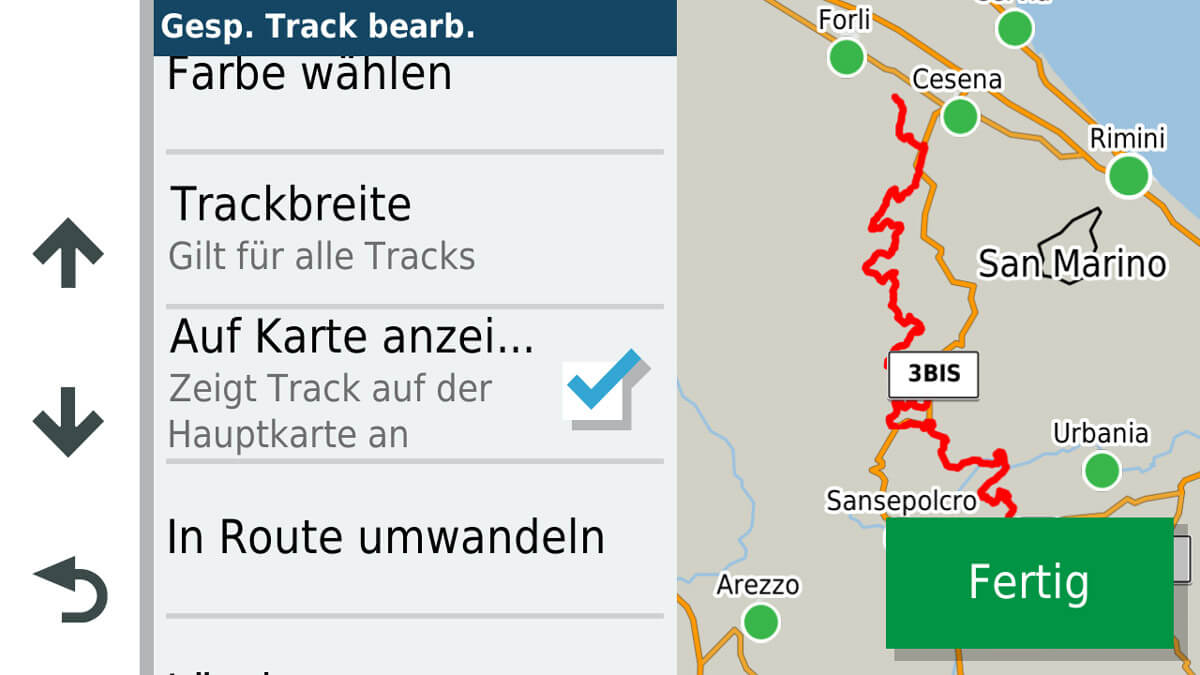 Settings menu for tracks on the ZumoXT. Tracks can also be permanently displayed on the map and highlighted in colour and width.

Route and track are displayed in parallel on the map. The route (magenta) turns left, the track (red) is also visible. This allows you to see where the calculated route deviates from the original track.

You can imagine a track like a breadcrumb trail in Hansel and Gretel. A track consists of a string of coordinates and is therefore not changeable. A track is completely decoupled from the map material and therefore also functions independently of the map coverage on the device.

Advantage: Map coverage and calculation parameters do not play a role in track navigation. A track is always absolute. This guarantees that a defined route is also travelled 1:1 when navigating.

Disadvantage: No turn-by-turn directions are generated during track navigation. Navigation is visual, using the track display on the device, and requires significantly more concentration.

The kind of navigation preferred depends on the individual focus. Generally, route navigation is suitable for road tours and for spontaneous navigation. On predefined offroad routes or routes with a high offroad content, track navigation is usually preferable.

The coverage and quality of the map used have a significant influence on the navigation experience. The more detailed the map, the easier it is to look for or calculate alternatives if you encounter passages that are not passable.

Tip: For better orientation, tracks can also be permanently displayed on the device and highlighted in colour. This means you always have an overview of where the original track runs, even if you deviate from it or if the track has been converted into a route.

GPS devices include the option of recording your own tracks. This is particularly easy with the ZumoXT's track recorder. If you share this data with the community, valuable suggestions for their own adventures will be available to other motorcycle travellers. 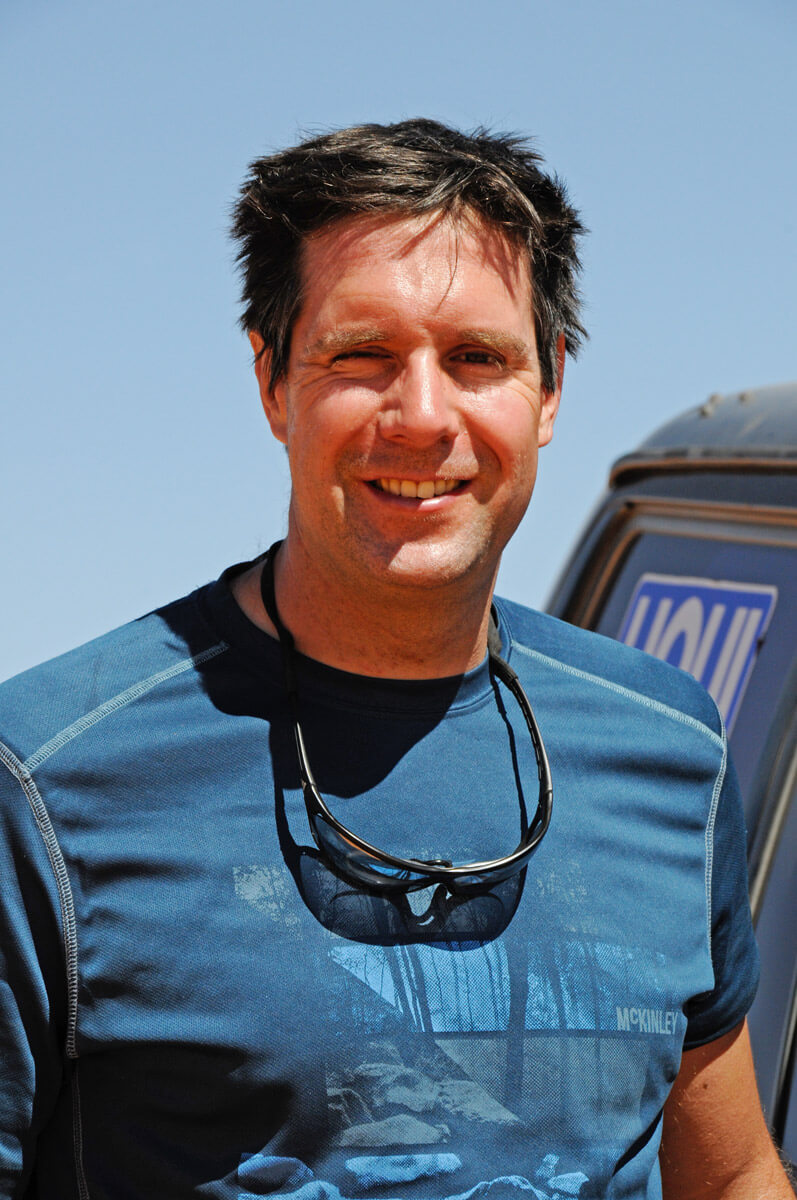 Lutz von Steynitz (44) has a degree in sports science. He works as a product trainer in the sports industry. GPS navigation has been an indispensable tool for him for over 20 years in various fields of application, such as outdoor, sports and motorcycling. Lutz has a passion for offroad travelling, which has already taken him through Europe as well as into Africa. 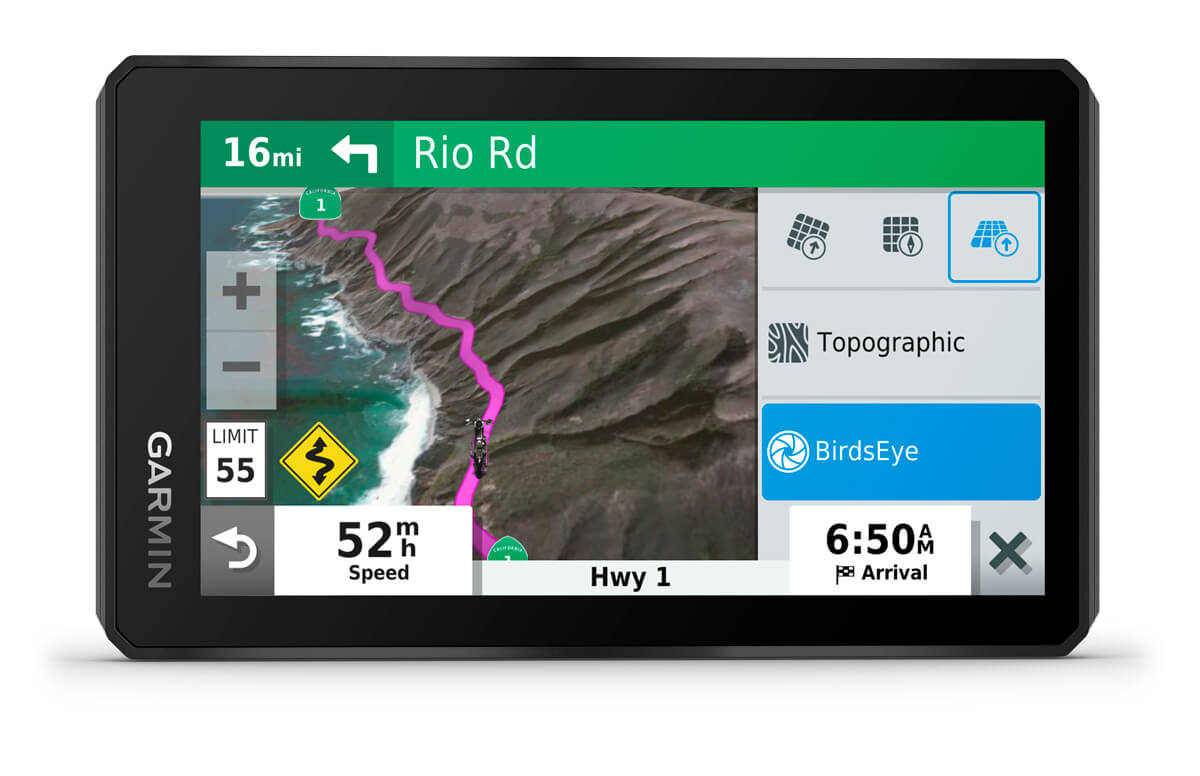 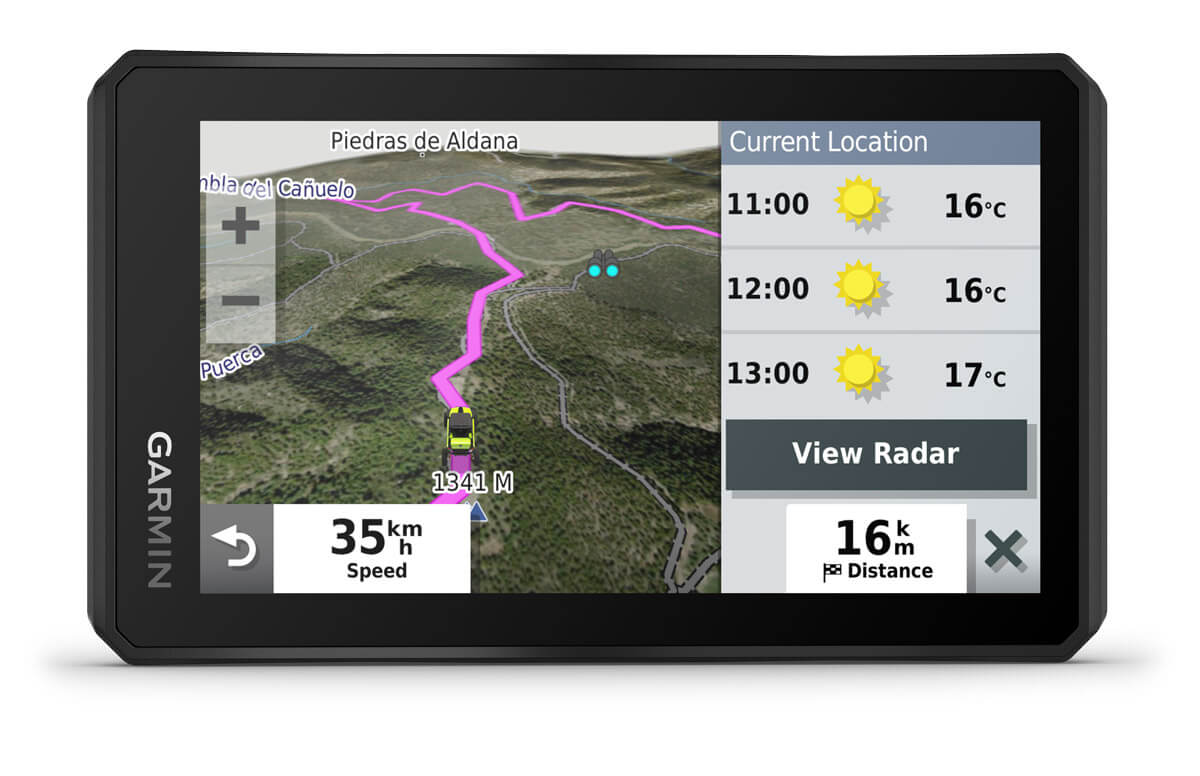 The GPS devices Zumo XT and Tread from Garmin are also capable of track navigation.