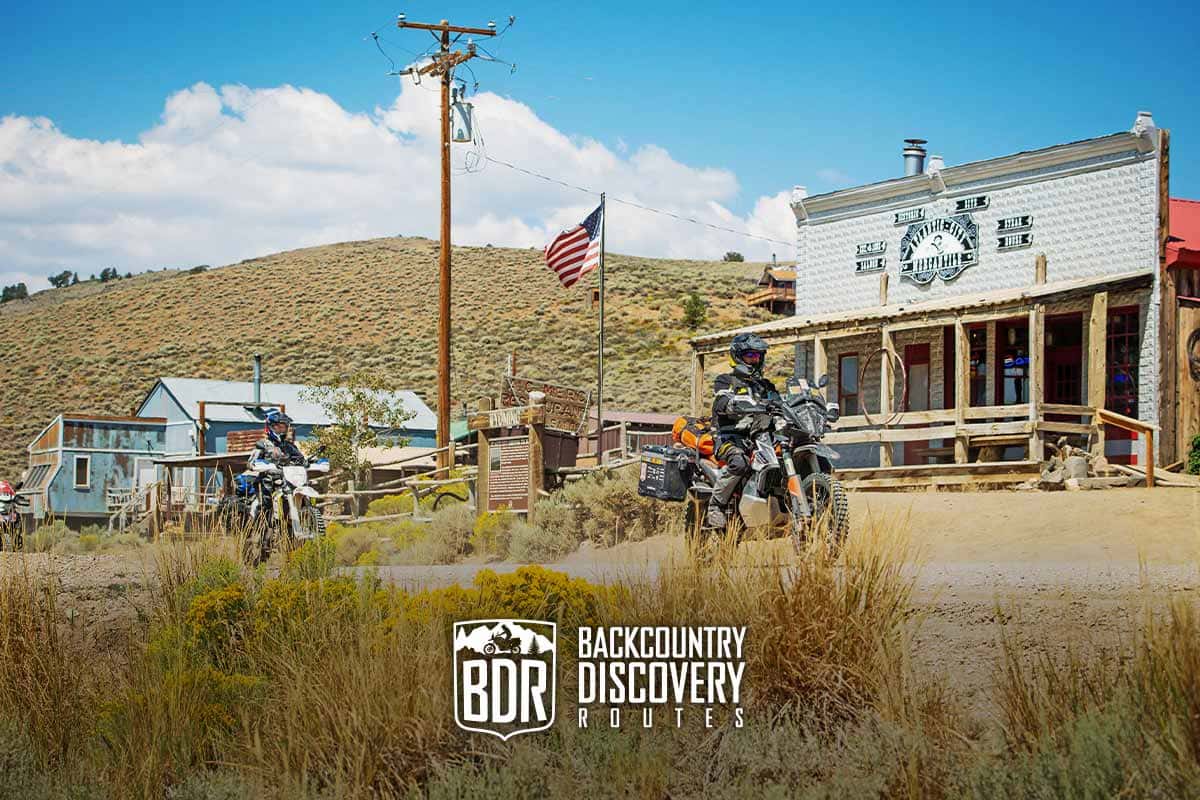 The sparsely populated state of Wyoming, where the prairies give way to the Rocky Mountains, is a perfect spot for adventure riders seeking authentic adventure. The recently opened WYBDR, offers a carefully scouted track through the most beautiful regions.

As we cross the border, coming from Colorado, and ride our first two hours in Wyoming, one thing becomes clear – there are more antelope and deer here than people. And indeed, more antelope live in this vast state where the Great Plains hand over to the Rocky Mountains than in the entire rest of the continent. There are an estimated 400,000 of them. If to that you add approximately 416,000 deer, the four-legged animals clearly outnumber the 581,000 humans.

The numerous herds are beautiful to behold and add to the feeling of wildness that envelopes us as we travel far away from civilisation. However, they can be a danger for riders because they may suddenly appear, meaning that the risk of collision can be extremely high. We experience a few near misses, as antelopes tend to spook easily and change direction suddenly. Wyoming's abundant wildlife also includes bison, mountain lions, wolves, bald eagles, grizzly bears, black bears, moose and wild horses. 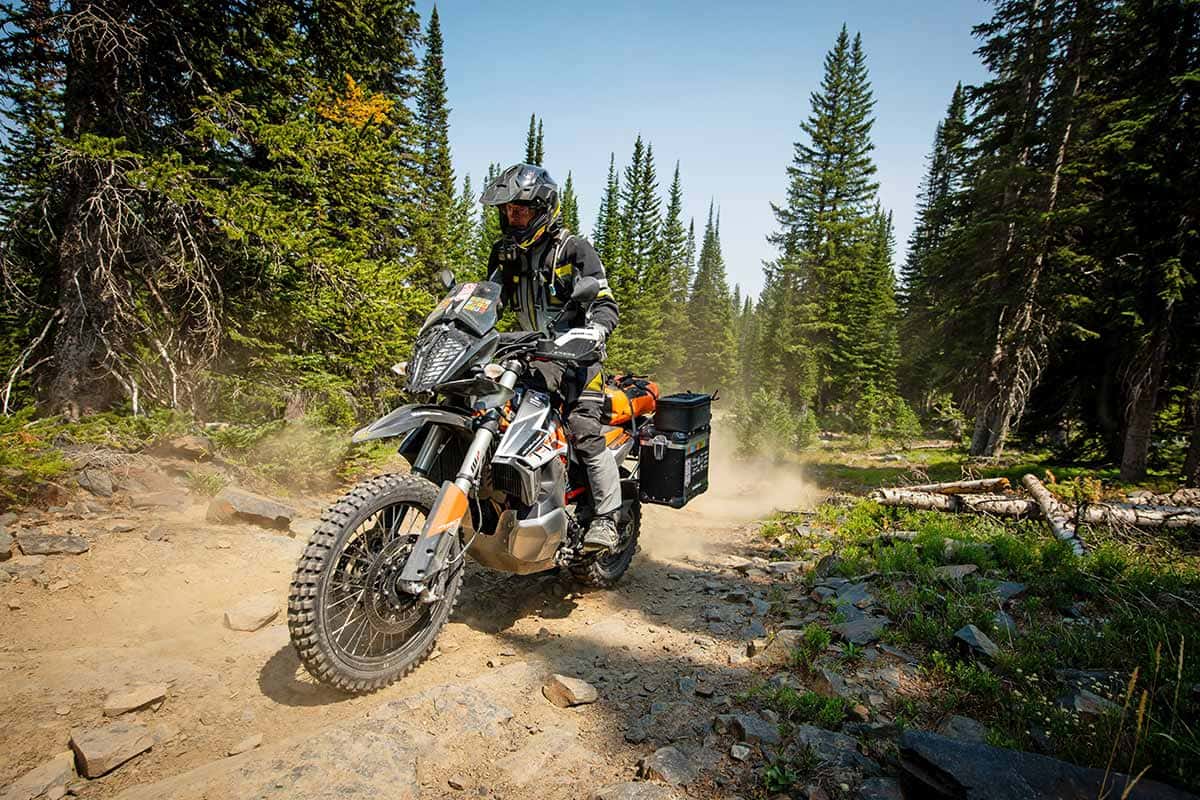 These trails are among the most beautiful of all the Backcountry Discovery Routes, but they have to be dry. Many of the stretches become muddy when it's wet and are then not passable even with an adventure bike. One local said to us: "These roads turn into whale snot when it rains". I have no personal experience with marine mammal secretions, but I'm still glad that it doesn't rain on our trip. 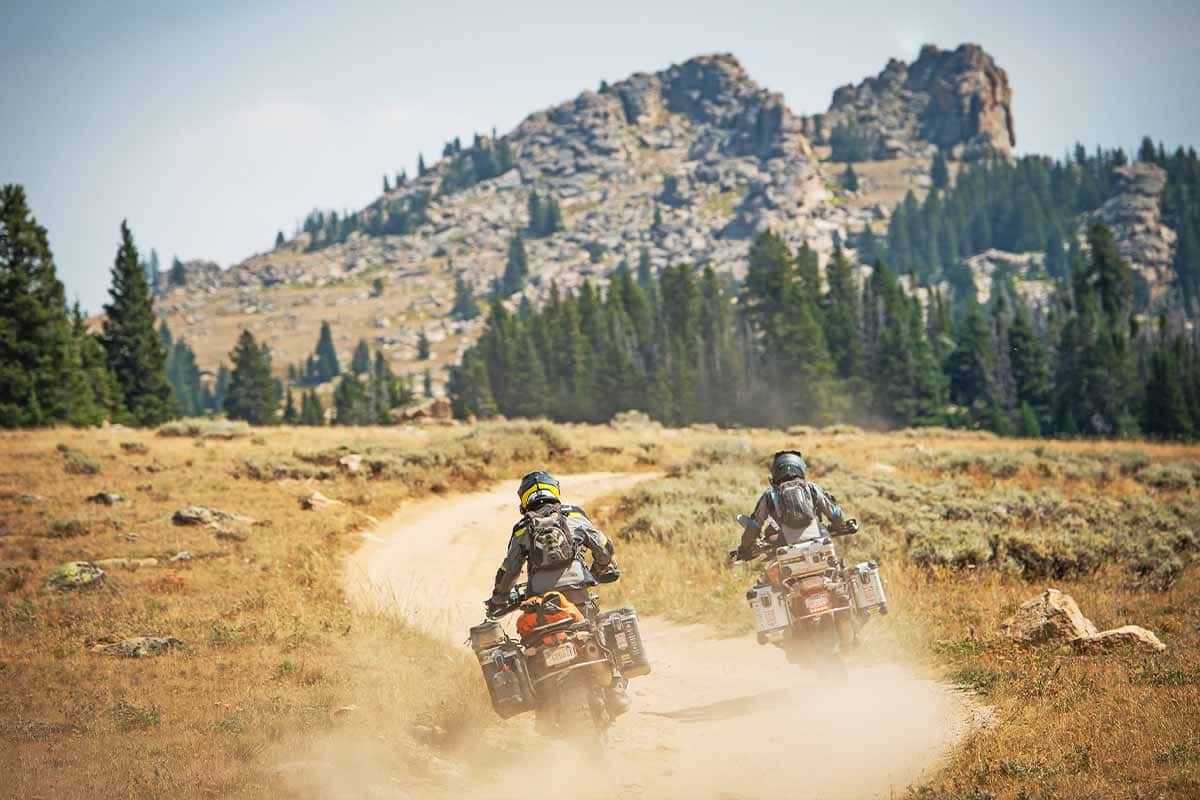 One of the many gravel roads in the mountains above 3000 metres.

The BDR route planners have made an effort to incorporate as many of the dirt roads that are so common in Wyoming as possible into the track. The way these trails - called Two-Tracks here because of the two paths - wind through forests and open landscapes, gives them a special fun factor. Riding the perfectly arranged curves and the roller coaster terrain gives rise to a special flow feeling. While there are fun sections like this on many BDRs, what makes Wyoming special is that these stretches often go on for hours.

They cost a lot of energy and require the utmost concentration, but we enjoy the thrill so much we don't ever want to stop. I have particularly positive memories of the Beaver Rim, where flowing field paths combine with wide views - and that for hours.

Further on, we encounter Two-Track routes in the most diverse forms. They lead us over endless root passages, through scree fields and watercourses until we have a permanent grin written all over our faces. 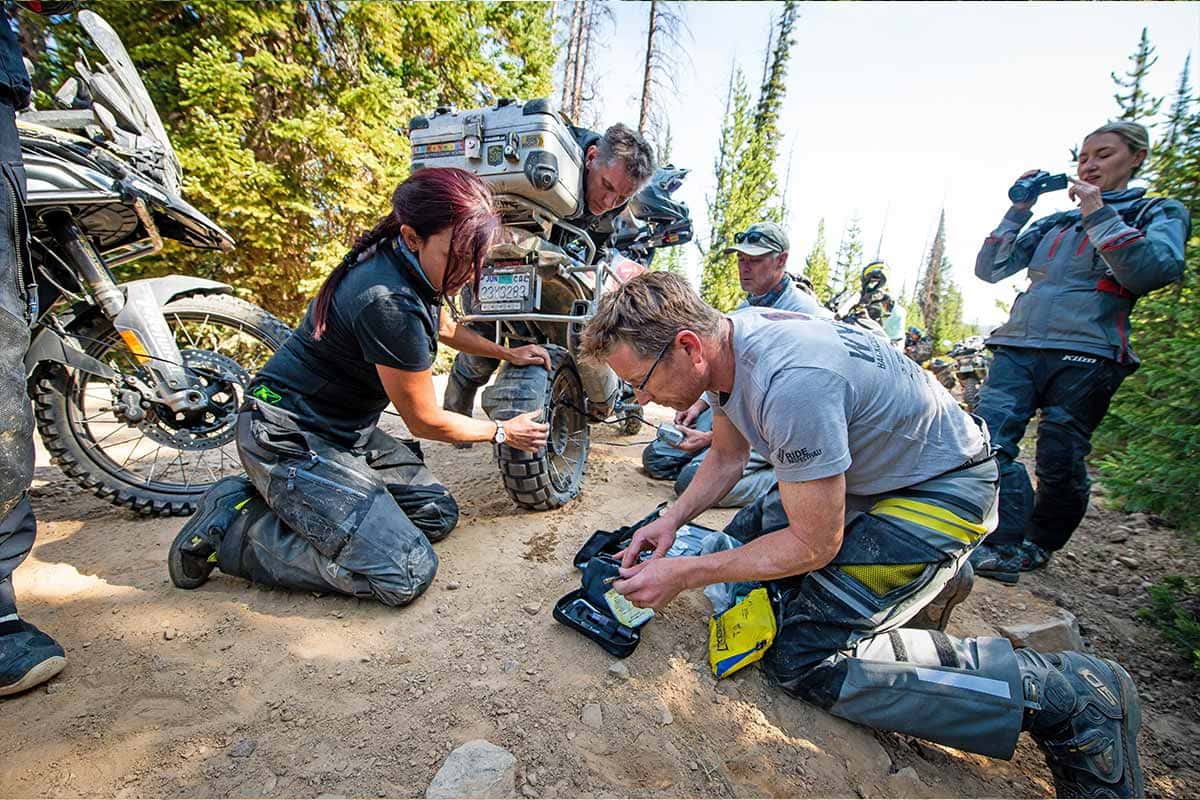 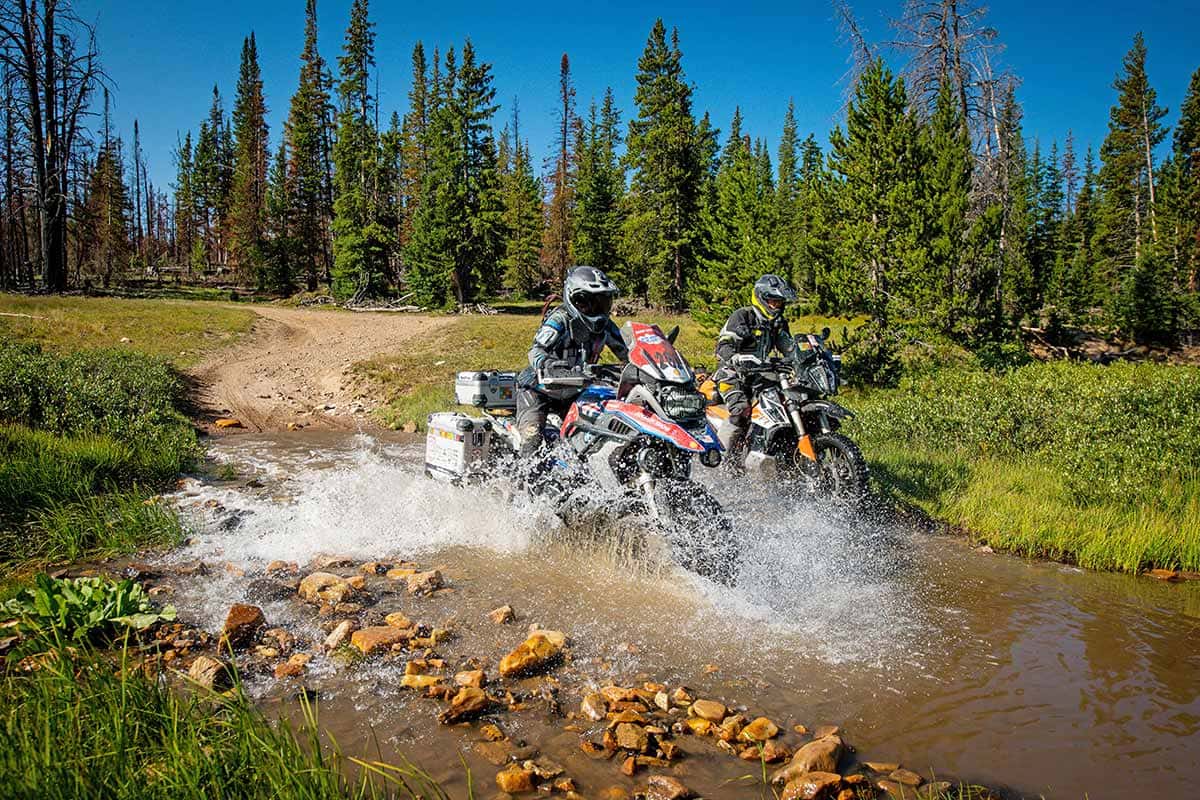 Jocelin Snow and Paul Guillien enjoy one of the many water crossings on the Wyoming BDR. 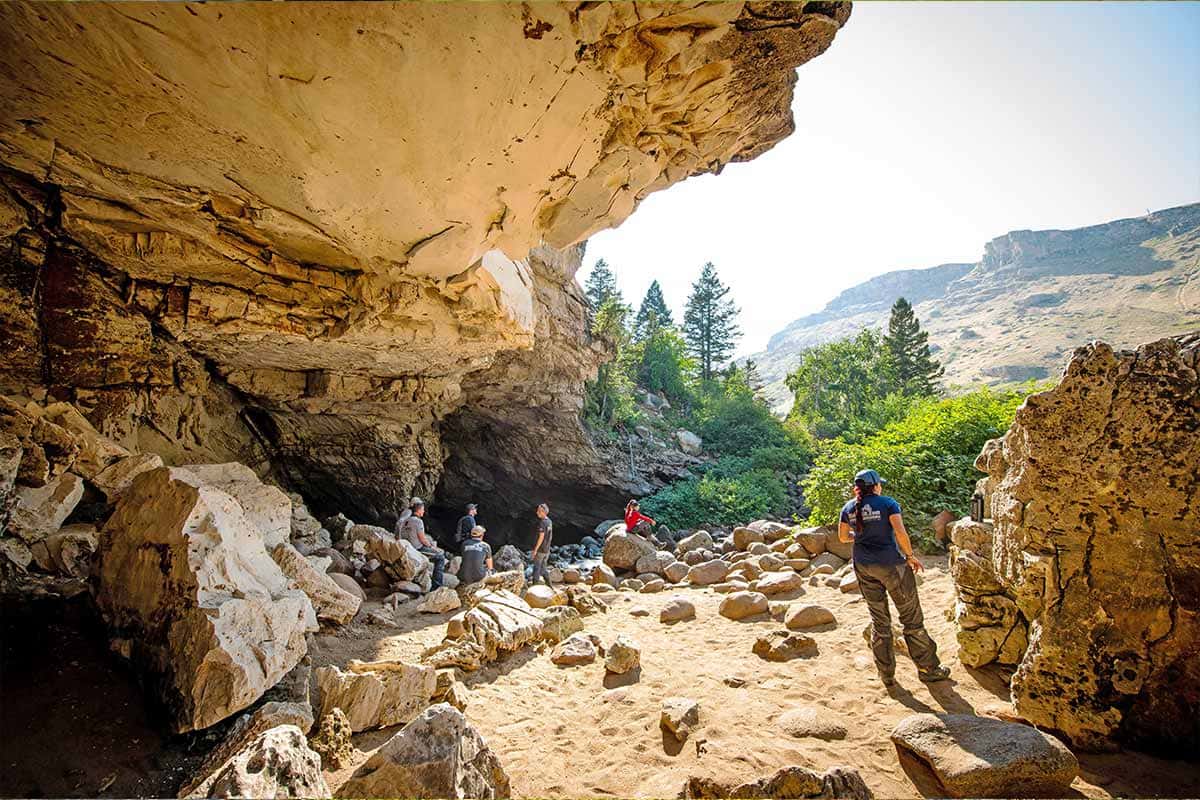 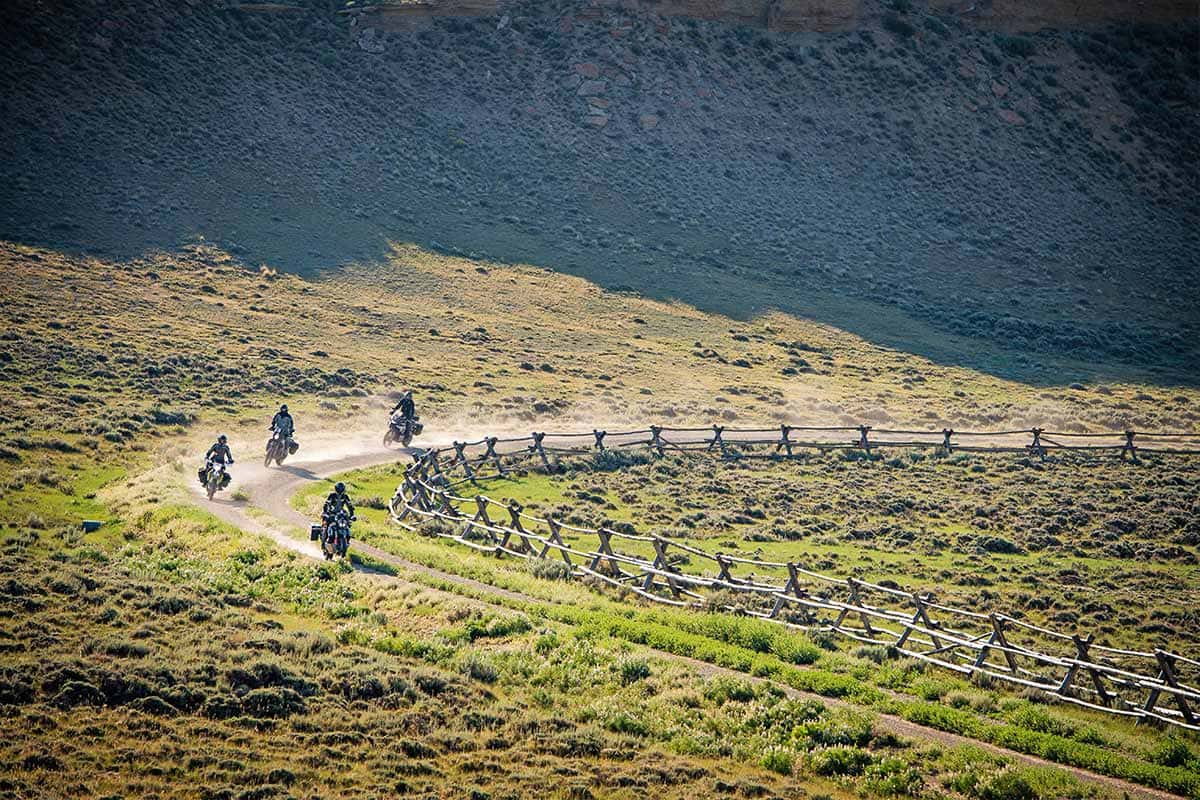 The WYBDR crosses a number of mountain ranges, including Sierra Madre, Snowy, Shirley, Wind River and Big Horn Montains. We ride to viewpoints at an altitude of up to 3352 metres and even spend the night at Medicine Lodge Lake at 2835 metres. Many riders notice a shortness of breath when steering their motorcycles in this thin air. I feel tipsy right away after only one beer at the camp at a height of over 2743 metres. The high alpine trails are incredibly beautiful and the views above the tree line are spectacular.

In the western USA, forest fires are becoming more frequent and more intense. It is becoming increasingly difficult to find times when you can ride a BDR without seeing smoke on the way, or finding the track closed. This was the case on our trip in Wyoming. It wasn't bad, but most of the time there was smoke in the air from forest fires in the southern neighbouring state of Colorado. We also had to skip the last 40 kilometre section of the stretch due to a fire blazing right on our route. 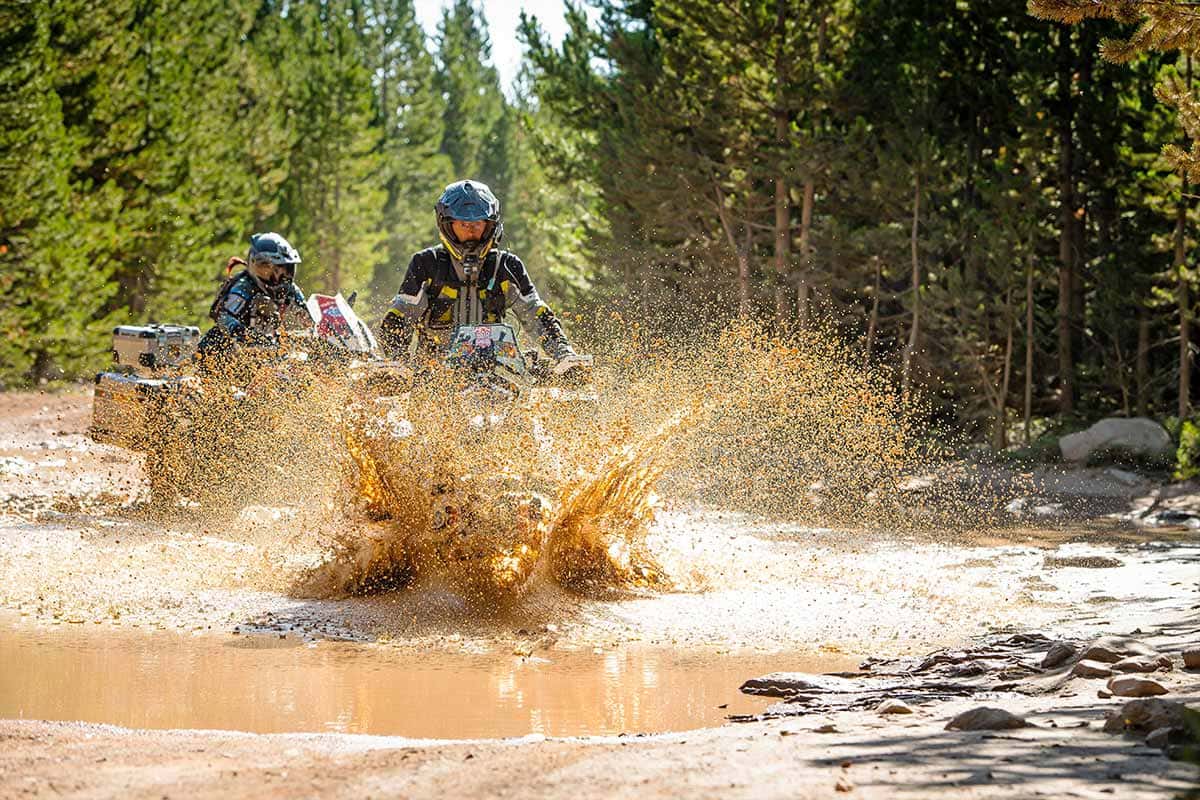 The mud is incredibly slippery on some stretches. 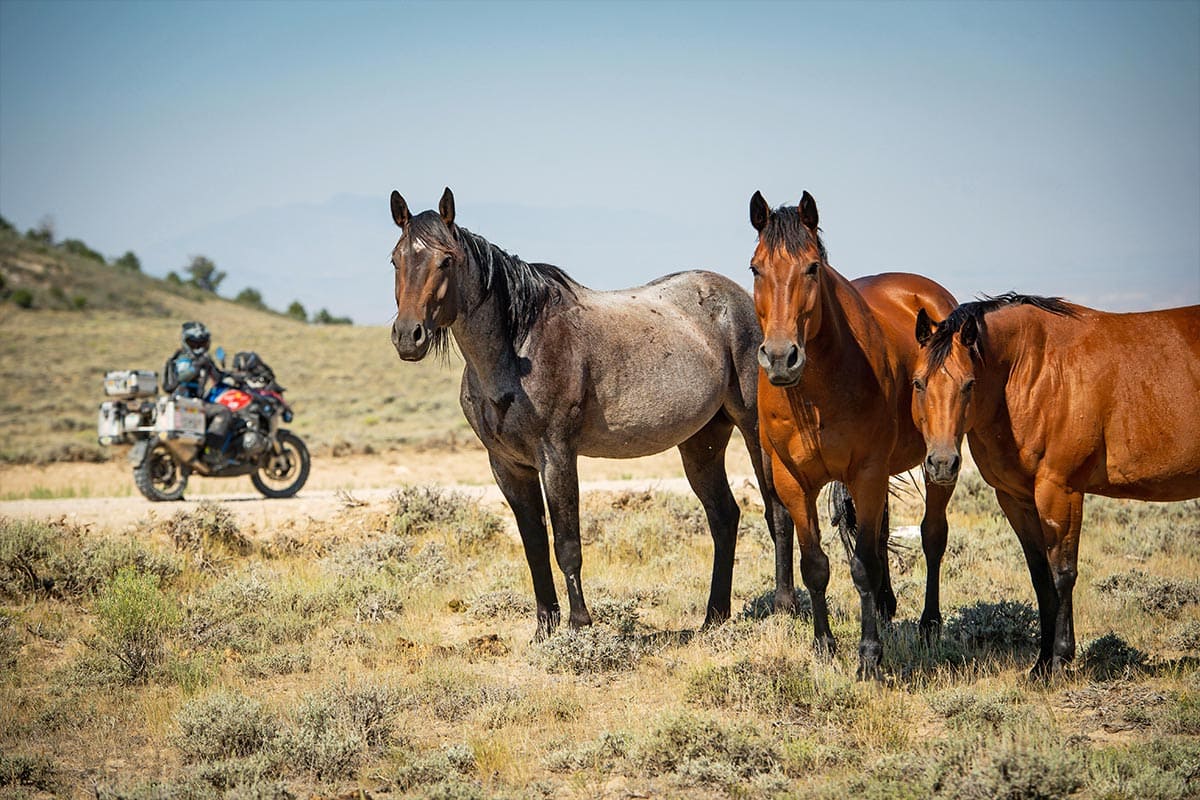 Wild horses are often found in the open grazing areas of Wyoming. 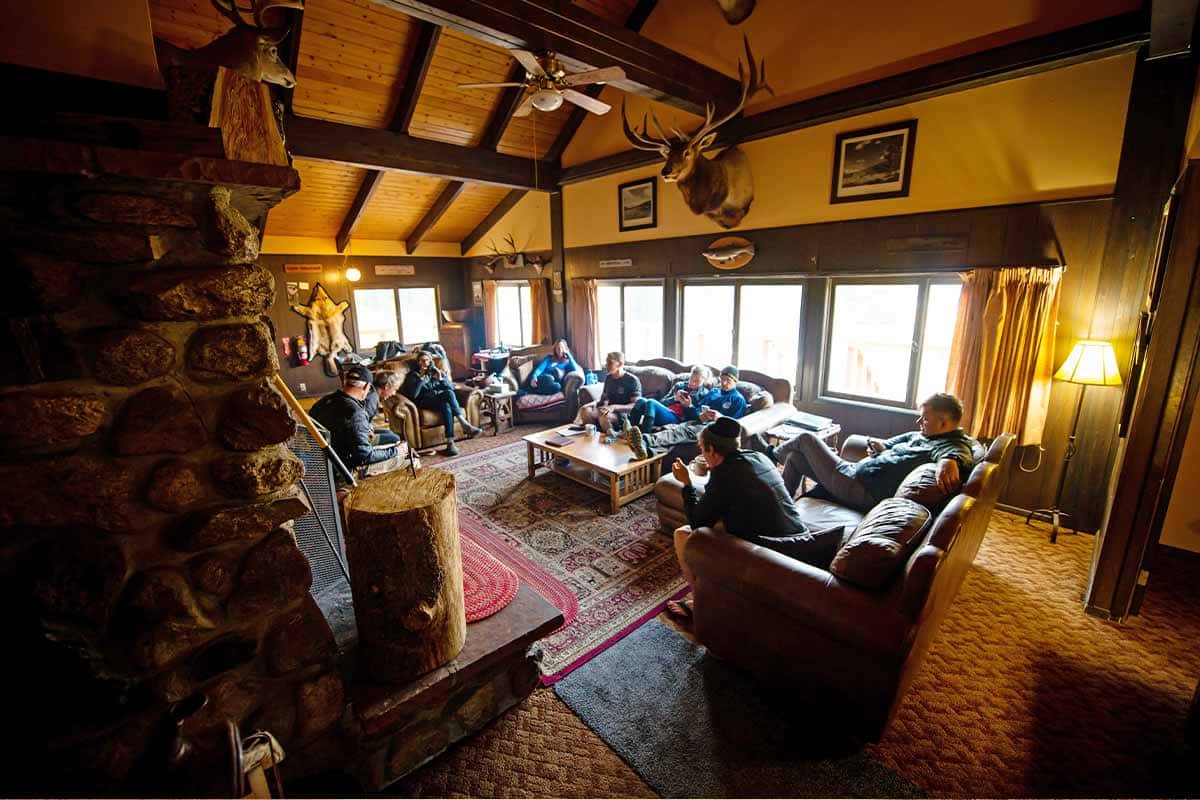 A moose in the morning

As I sit down to breakfast in the Moose Crossing Restaurant at Bear Lodge Resort in the Bighorn Range, I hear someone say in a loud voice, "Well, there's your wildlife!" I look up from my menu and see a moose running right past the window. I jump up and run outside to check. An adult moose and its baby are feeding in the pond next to the lodge. I go down to the pond and take a few photos before retreating to the balcony as they move in my direction. They are such huge and majestic animals that it's a special experience to see them up close. With a current moose population of only 3500 animals, it's much rarer to see them than antelope or deer. 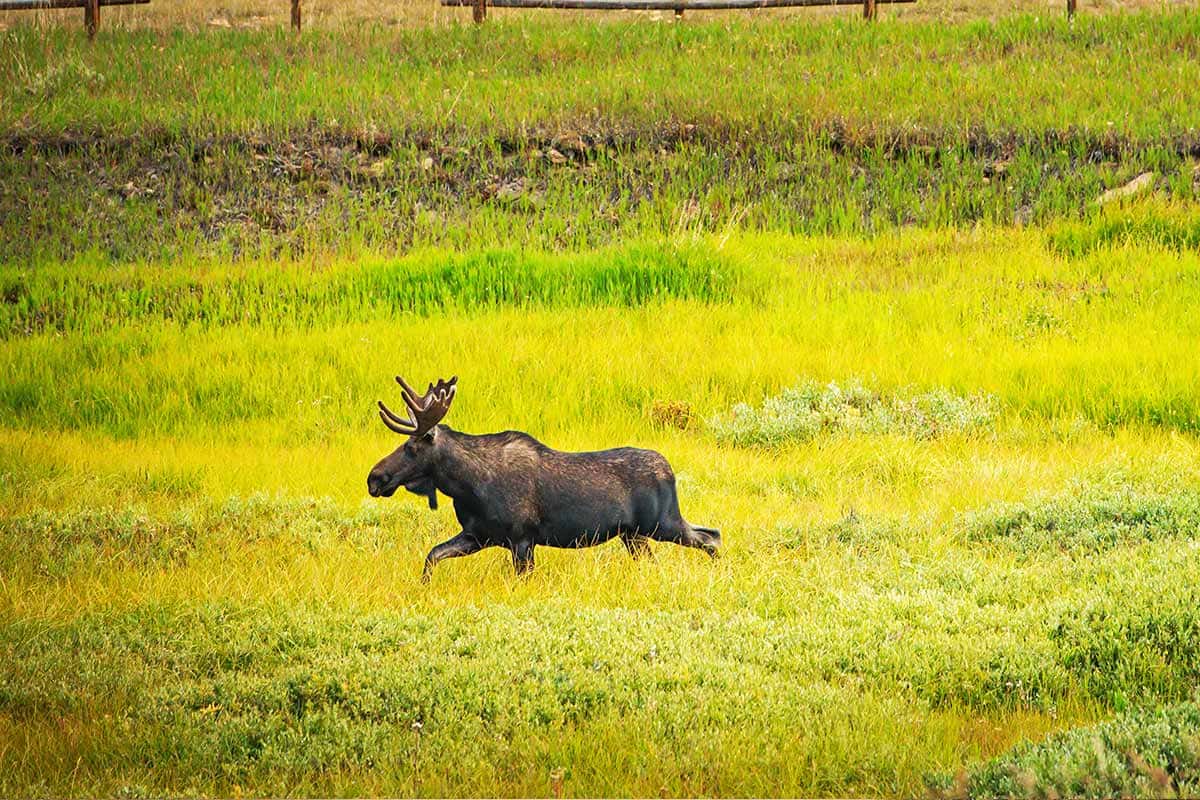 An encounter with a moose is a special experience.

Only a narrow time window

In many ways, the WYBDR should be at the top of the list for anyone seeking a true adventure trip. The abundance of wildlife, the fantastic roads, the remoteness and the Wild West atmosphere of the state are unique. However, the season is very short due to the high altitude and the huge amount of snow. Riders should expect the high passes on this route to be impassable until mid-July. The same passes can be covered with snow in mid to late September and it's definitely difficult to find weather windows that allow safe passage in October.

What is the next step for BDR?

The BDR organisation is currently developing routes in Oregon, Northern California and the South East of the USA. Recent wildfires have delayed progress in developing some routes, so the organisation is not sure which state will be released in 2023, but it plans to have a route ready for the community by then. 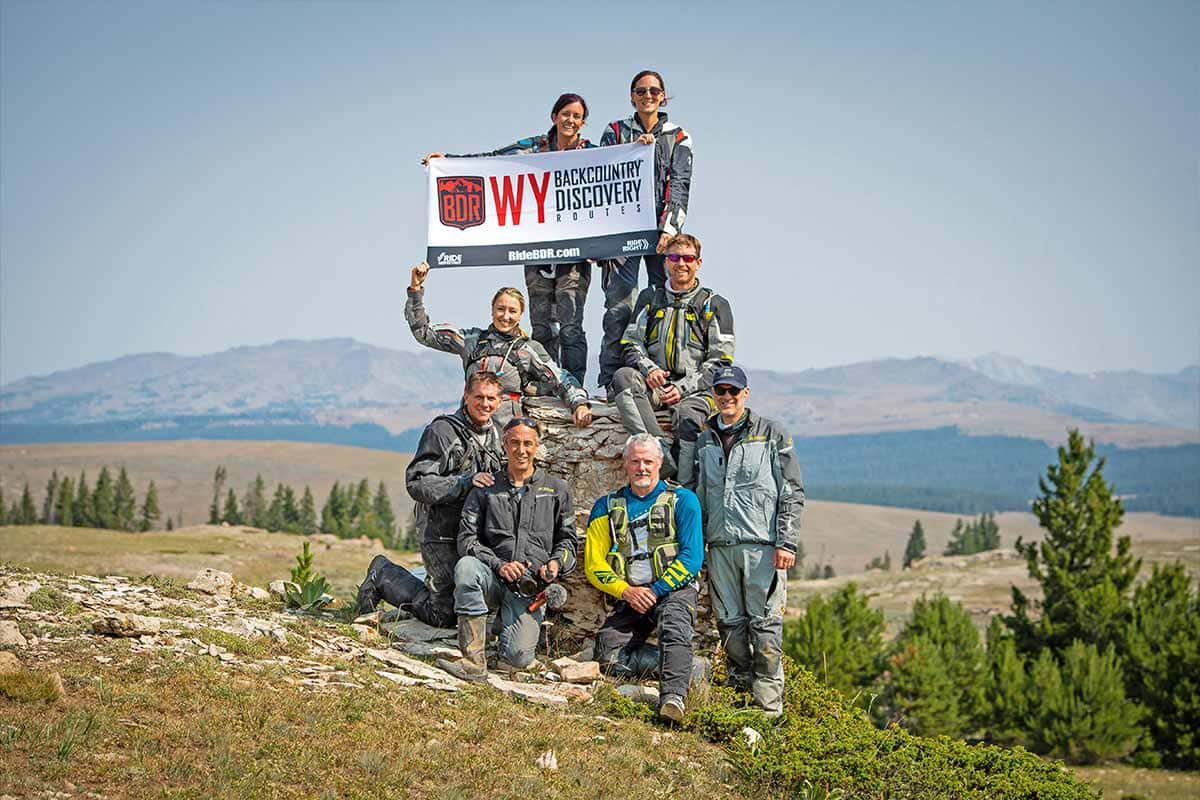 BDR is a 501c(3) non-profit organisation that develops off-highway routes for dual-sport bikes and adventure bikes. In the last 12 years, 11 routes with a total of 11,000 adventurous miles have been created. The organisation is committed to developing and maintaining adventurous riding opportunities for the community and motivating people to explore the hinterland by motorcycle. It also represents the interests of motorcycle adventurers, promotes safety and imparts knowledge about successful travelling in the hinterland. The routes also contribute to sustainable economic development in disadvantaged rural areas. The BDR project has been made possible through the financial support and leadership of Touratech USA since 2010.

Most of the western part of the state lies in the Rocky Mountains, whereas the eastern part consists of high prairie landscapes known as the High Plains. The state tends to be drier and windier than the rest of the country and records greater temperature extremes with a record high of 46°C and a low of -54°C.

Almost half of the country is owned by the federal government, especially the Yellowstone and Grand Teton national parks. 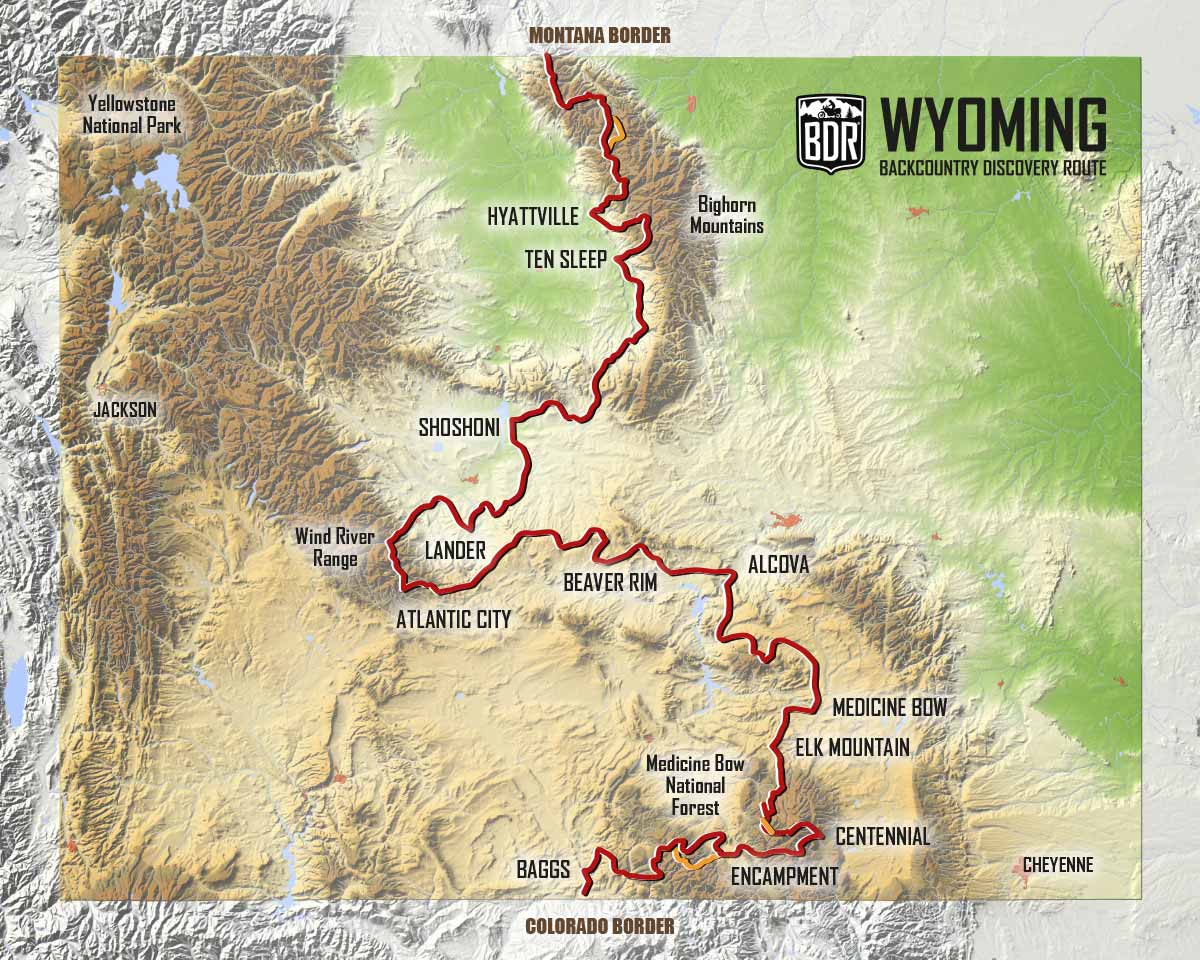 Wyoming's economy is characterised by tourism in the national parks and ski resorts, as well as by the extraction of coal, natural gas and oil. Wyoming is also an agricultural state producing barley, hay, sugar beet, wheat and wool. Livestock farming also plays an important role.

Wyoming made history when it was the first state to introduce the right of women to vote and elected the first ever female governor in the US in 1869, which was way ahead of its time.