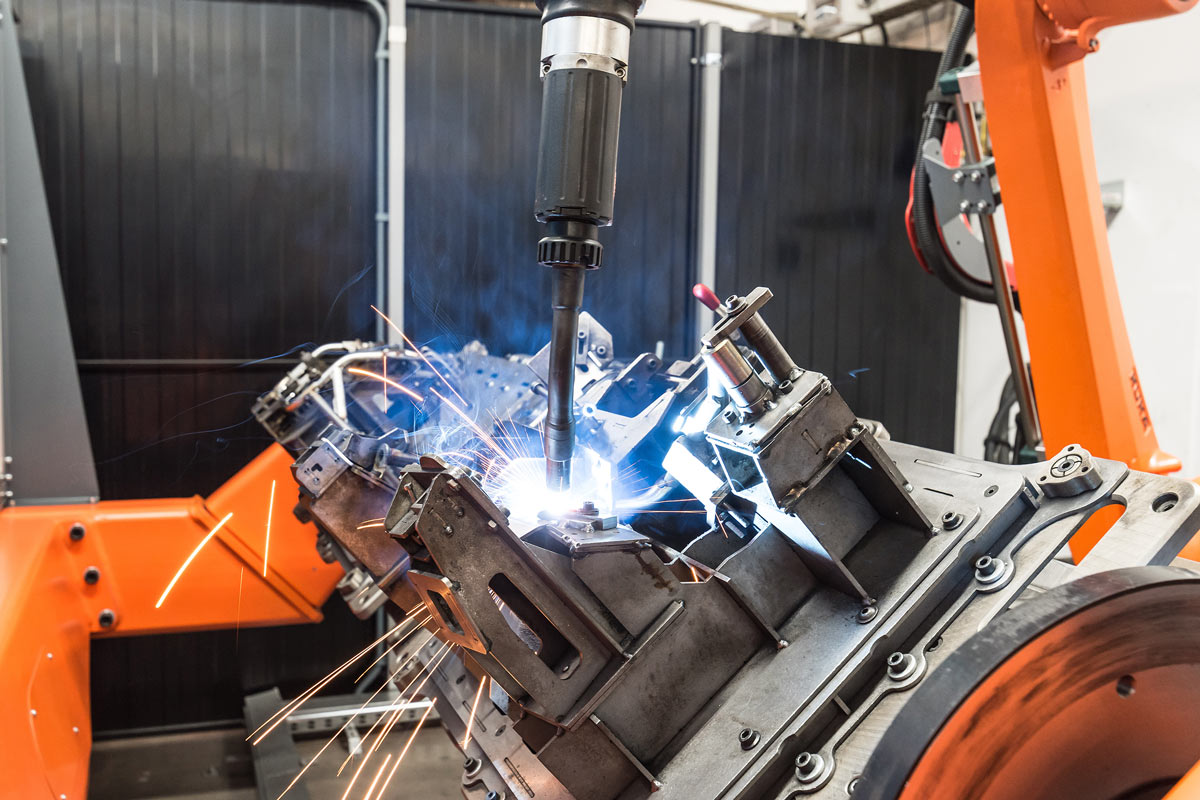 The welding cells developed by Moldes Epila Industrial Machinery (MEI) and Touratech use state-of-the-art robots from KUKA. These machines, known for their high precision, are handling robots, i.e. systems that can carry out a wide variety of tasks – from loading, drilling and milling, to painting or gluing through to welding. As versatile as these robots are, MEI's specialists first had to "teach" them how to use their capabilities optimally for the specific task of welding. This required complex programming.

The high-precision servo motors of the robots allow an excellent position repeatability of only four hundredths of a millimetre, so that, with these systems, Touratech can accomplish very low tolerances when dealing with large quantities.

The welding units installed on the Touratech welding robots employ the CMT method. This results in low heat input into the workpiece and very little weld spatter – both factors that greatly reduce the amount of reworking required. In addition, this method creates much less welding distortion than other methods. And the quality of the weld seam is also particularly high; this is regularly checked and confirmed with macrosections. 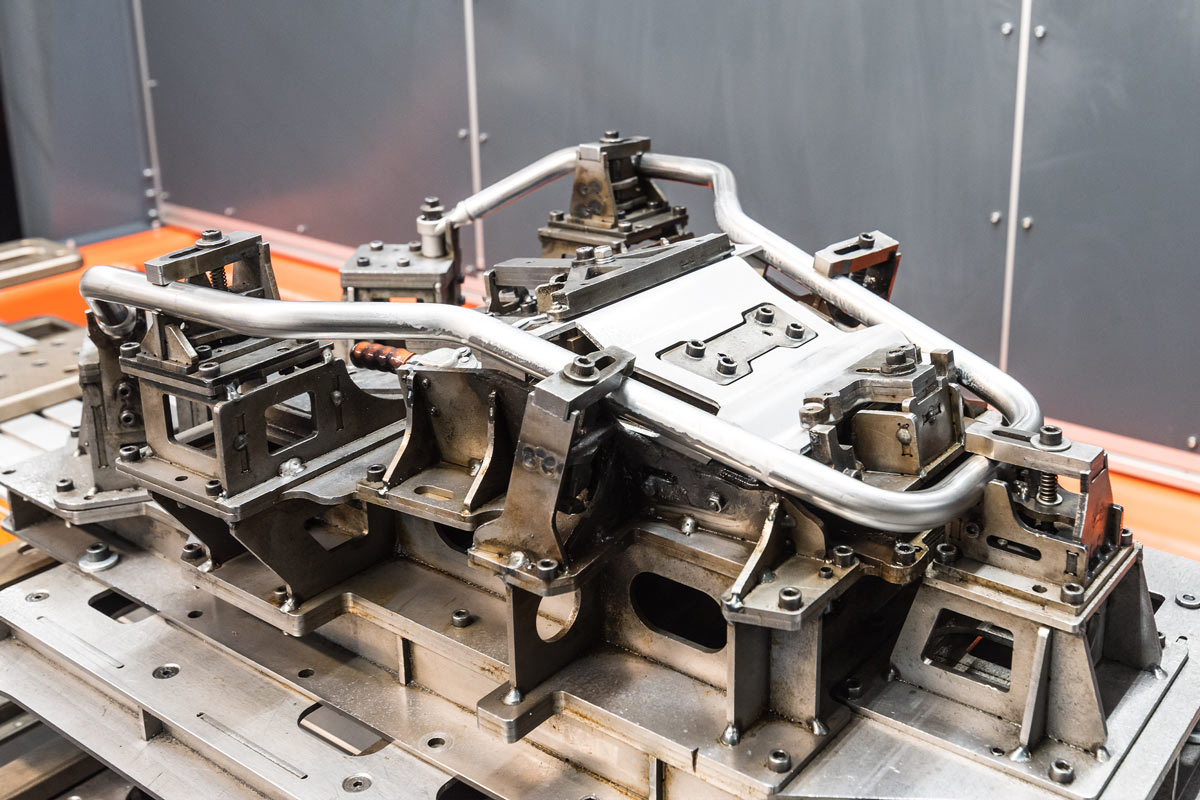 Extensive in-house development: Clamping device for fixing the components to be welded

It's not only the legendary ingenuity of the developers that makes Touratech products unique. Superior quality is also part of the brand DNA. And with these new robots, precision reaches another level. The "process reliability", i.e. the constant quality of the results, also plays a major role. This not only reduces the effort required for reworking and saves resources, but process reliability also plays a key role in OEM production. "All Touratech customers naturally receive products of the highest quality," Thomas Besch, Head of Production at Touratech, explains. "But our OEM customers, i.e. motorcycle manufacturers for whom we produce original accessories, demand fully documented and traceable processes.

The new welding cells were developed as a joint project between Touratech and its partner company, Moldes Epila Industrial Machinery (MEI), which, like Touratech, belongs to the Happich Group. After joint project planning and requirements development, MEI implemented the robot technology; the welding table supports with the further improved clamping systems, on the other hand, are Touratech's own developments.

A total of 11 welding robots are now in use in the Touratech production department. At least three machines are continuously used for aluminium welding, the rest are used for welding stainless steel constructions. Ideally, the machines run in two-shift operation with no downtime.

These robots contribute to economic production at the Niedereschach site especially when it comes to articles with medium and high production quantities. "The pure welding time is not necessarily shorter with a robot," Thomas Besch explains. "The main advantage is far more that – while the robot is welding – the worker can be removing the previously manufactured part, checking it and, ideally, already inserting the next workpiece".

"To make the manufacturing process as efficient as possible, each welding cell is equipped with a rotary table," Process Manager, Jochen Laufer, adds. "The clamping device is loaded on one side of the rotary table, while welding takes place on the other. When the workpiece is finished, the table rotates, the workpiece is removed and the machine is reloaded," Laufer adds, explaining the process. 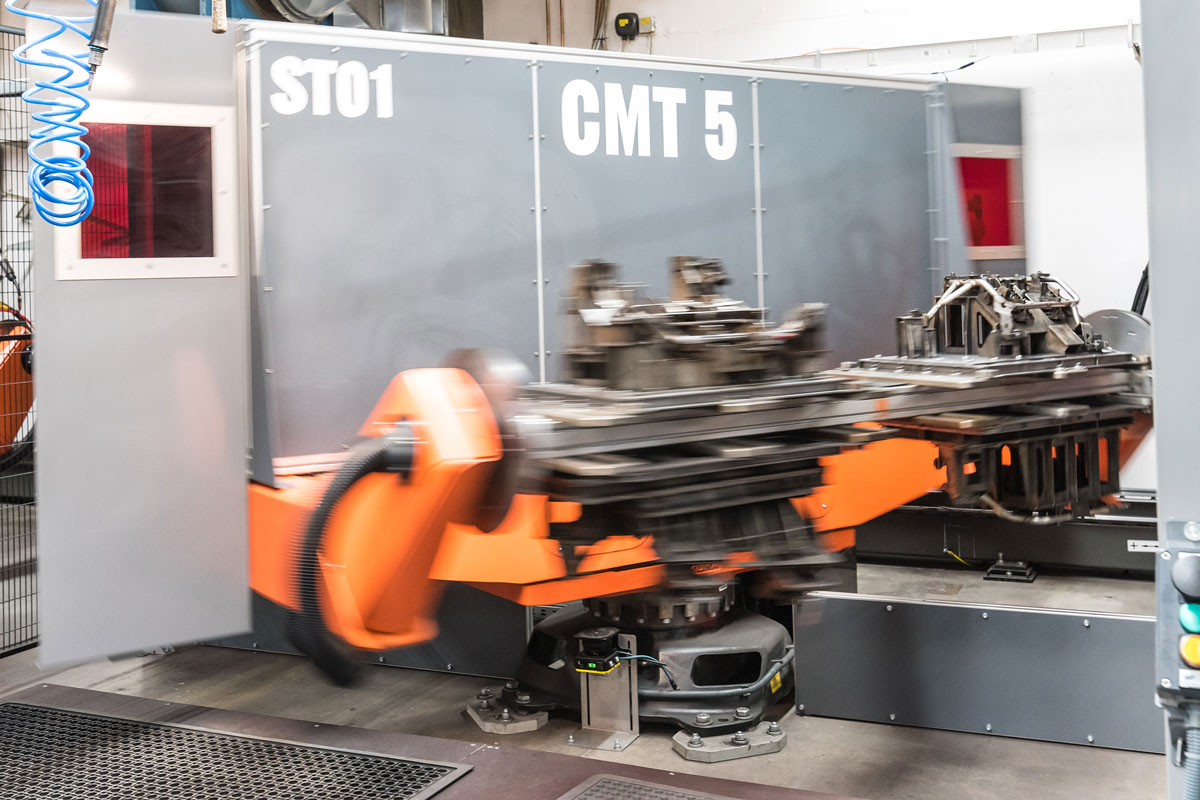 The significantly faster rotation of the table compared to older systems shortens the process times.

Table rotation in Moldes Epila's new welding cells only takes 2.9 seconds instead of the 12 seconds required using older equipment. "With quantities of several hundred thousand units, this seemingly small value adds up to a noticeable increase in productivity," the process manager says, spelling out the figures.

To ensure that the robots are used as efficiently as possible, Touratech uses a special IT system that precisely coordinates machine capacities, personnel resources and the scheduling of production.

À propos staff. Touratech's robot welding department currently employs 24 people. No one here is afraid that a robot colleague might take their job. That would also be unjustified. Due to Touratech's constant growth and the development of more and more new products, the company will always require good production employees.

Some of the training sessions for the plant operators took place at Moldes Epila in Zaragoza, capital of the Aragon region in north-eastern Spain. But the colleagues were also intensively trained by MEI specialists during the installation of the systems in the Touratech production department. 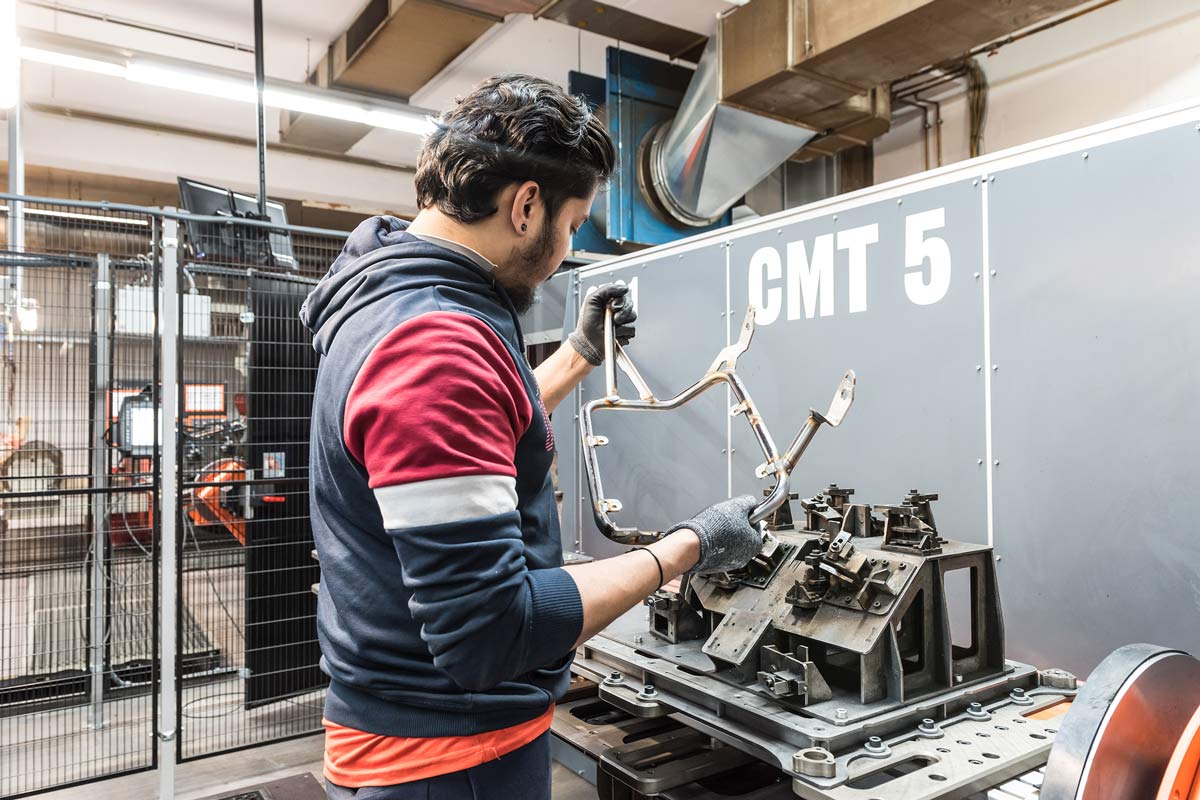 While the robot welds on the opposite side of the rotatary table, an employee removes a finished welded product and loads the clamping device with new components.

"Basically, experience with metal processing is desirable, of course, and ideally welding technology knowledge too," Thomas Besch says, explaining the skills required of the employees who operate the welding cells. "In day-to-day practice, however, precision in loading the welding devices and in the visual inspection of the workpieces are crucial."

The skills required of the system programmers are significantly higher. In addition to basic programming experience, here a sound knowledge of welding technology is required. "The programmer has to define the robot's movements so that they meet the requirements of the weld seam," Besch continues. "Meaning that, in addition to the direction and speed, the precise positioning of the welding device must also be taken into account." 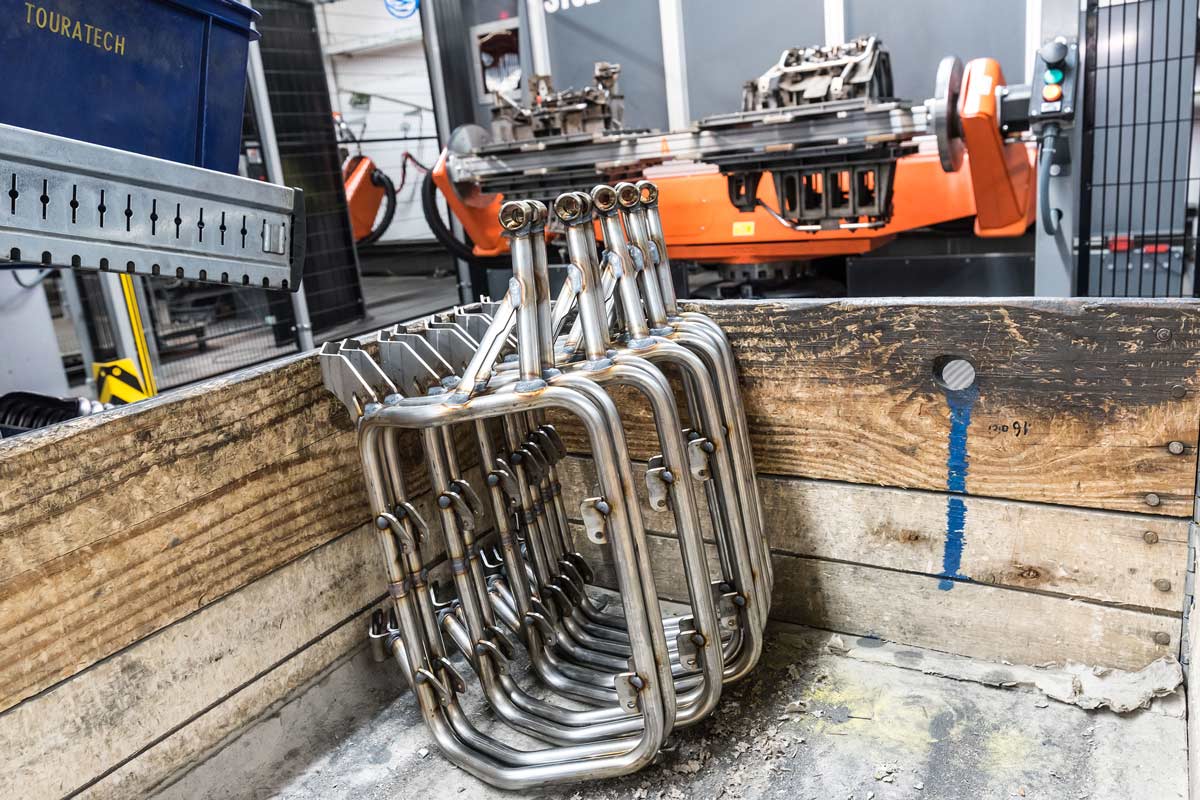 The four new welding cells therefore comply perfectly with the Touratech philosophy of manufacturing high-quality products economically at the headquarters in Niedereschach through the interaction of state-of-the-art technology and excellently trained employees. 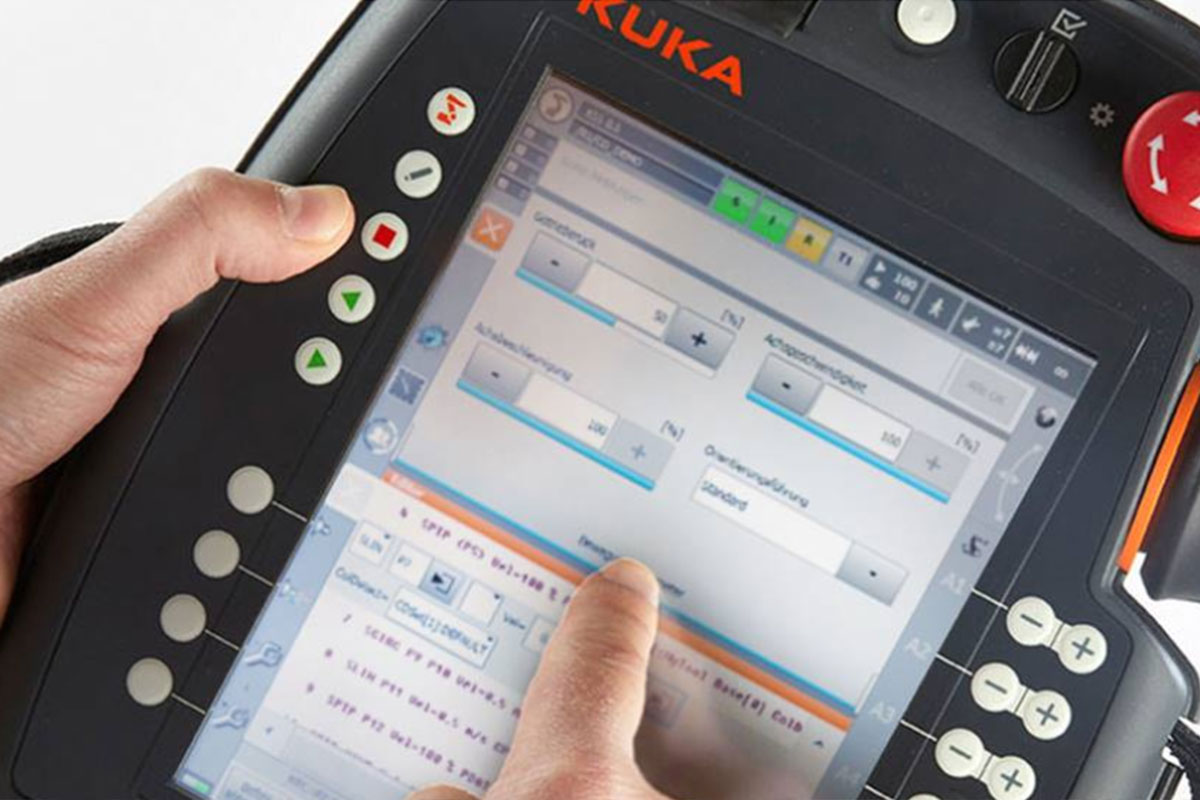 There are two available methods by which to "teach" robots the tasks specific to their workpiece.

Using the intuitive "ready2_pilot" method, the technician moves the robot manually. A 6D mouse is used to set path and process points. This means that the robot learns which path to follow during the process. Afterwards, the actions to be performed at the process points must be stored.

When teaching with the "smartPAD" – an operating panel with programming interface – the technician moves to the individual points of the work process and programmes the required commands for each position, such as welding ON / OFF, speed, or changing a tool.

Not only is this method more precise, but each point only needs to be approached once in order to save the position and actions. For this reason, Touratech uses a "smartPAD" to teach the welding robots.

Moldes Epila Industrial Machinery (MEI), based in Zaragoza, Spain, is part of the Happich Group, as is Touratech. MEI specialises in the manufacture of machines and the development of solutions for automated manufacturing and industrial processes.