Test Ride in the Vosges 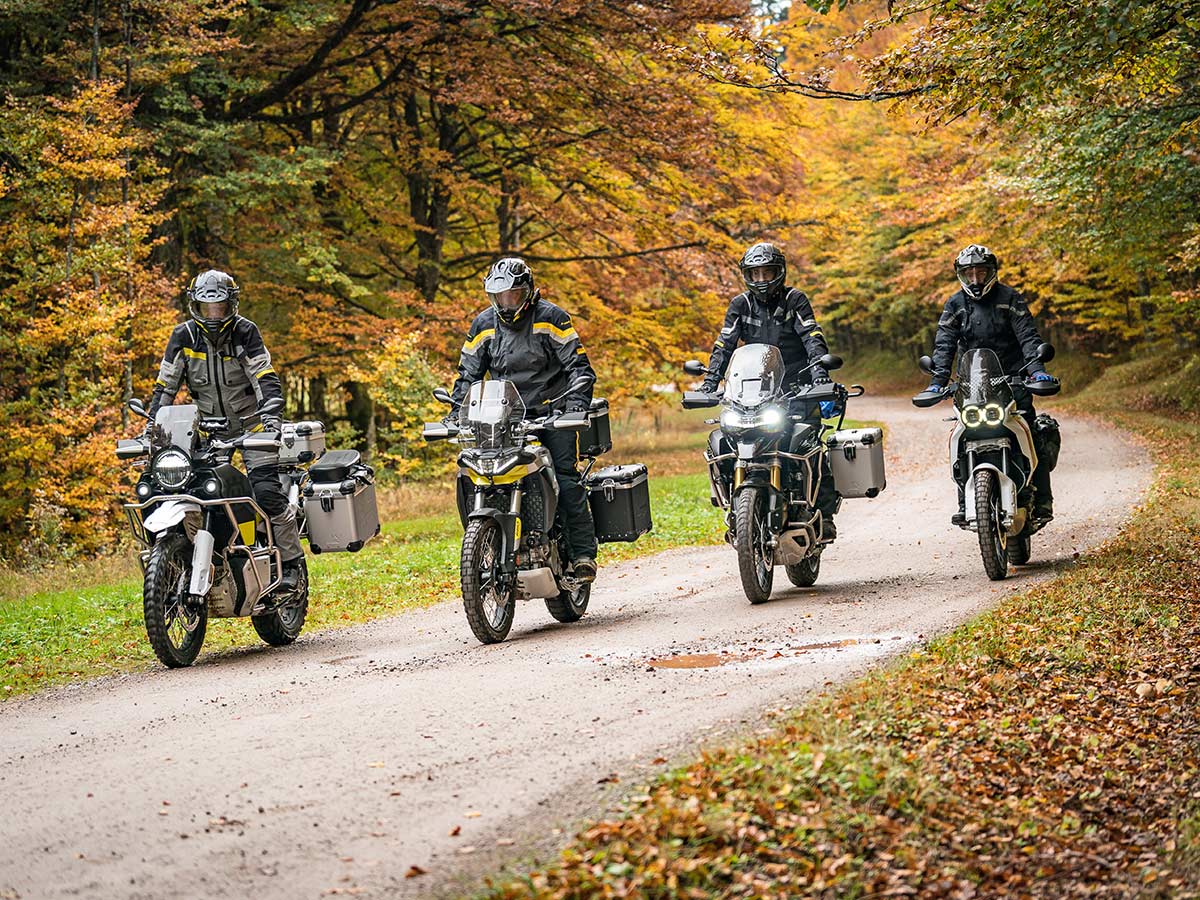 A Touratech team set off on a test ride into the Vosges Mountains with four of the latest, fully equipped adventure bikes. Machines and accessories had to show their colours on the smallest of lanes, on winding country roads and adventurous trails.

Cold dew still lies on the meadows as we start our four adventure bikes for the autumn test ride. A total of nine cylinders create a feel-good atmosphere on this cool morning with their powerful, cultivated sound. At the start are the Aprilia Tuareg 660, Ducati DesertX, Husqvarna 901 Norden and Triumph Tiger 1200 – all in full touring regalia. 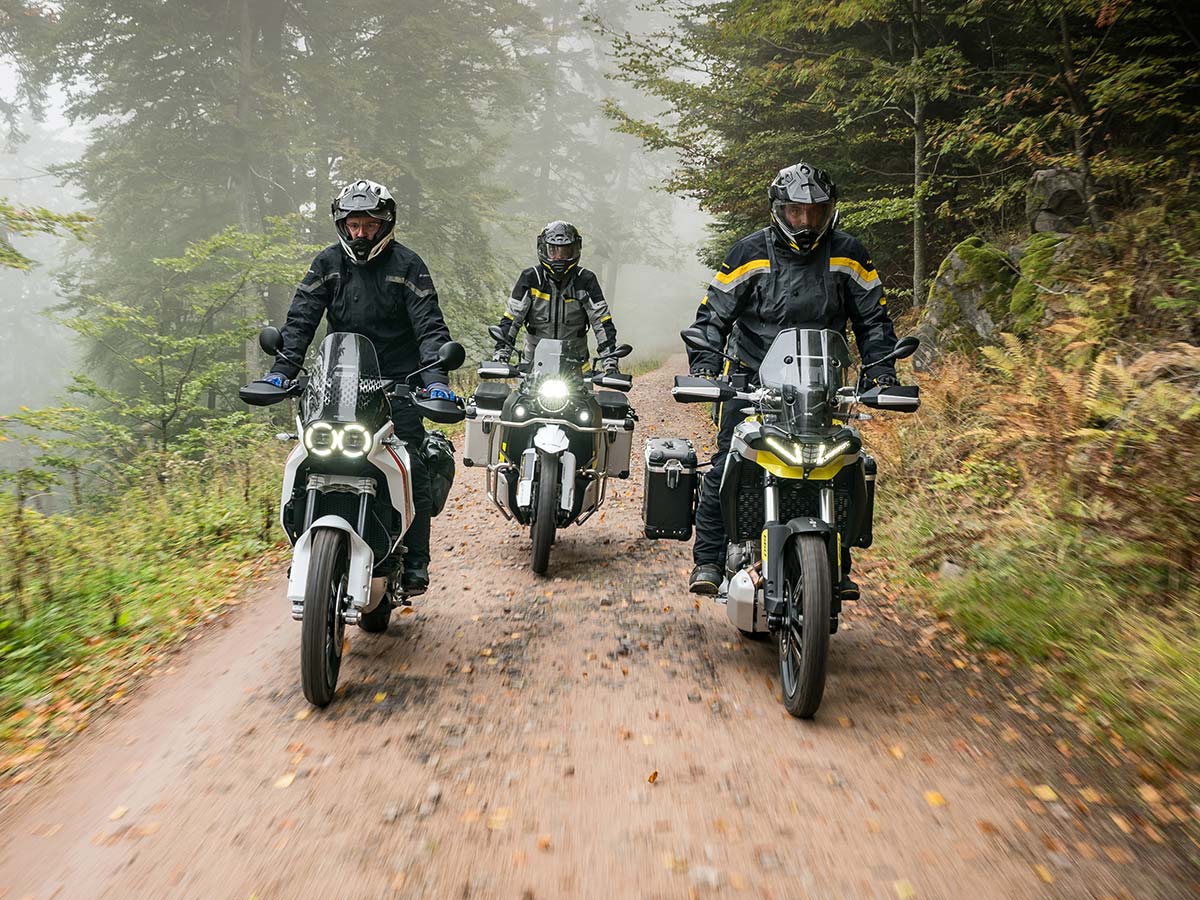 The test team is a colourful mix from different departments of the company. Christian and Philipp are from marketing, Jo is responsible for the webshop and Jens looks after the extensive fleet. What unites them is their enthusiasm for adventure bikes and adventurous tours – in this case, the joint mission to gather impressions and experiences with the latest Touratech accessories under real-life conditions. 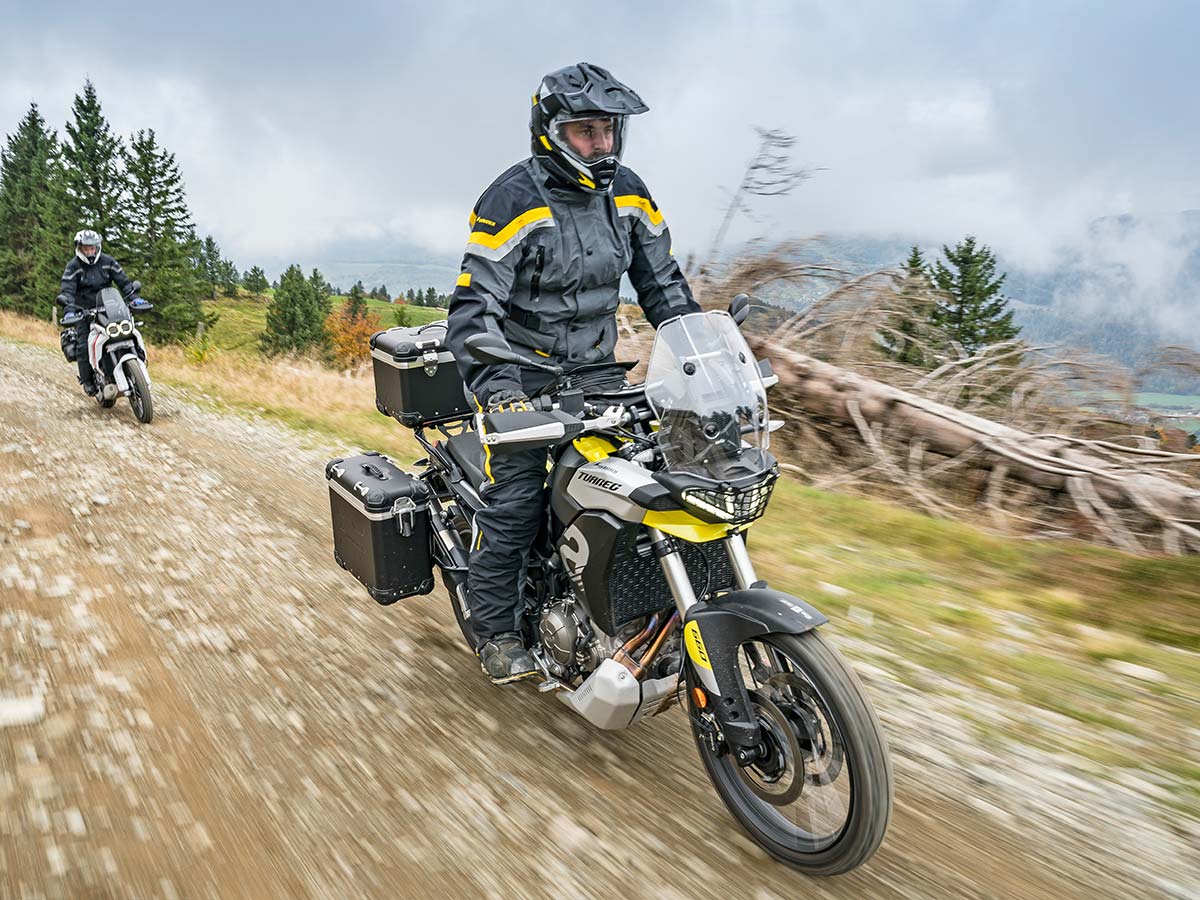 Before we set off, let's take a look at the navigation systems: Destination Vosges Mountains. The low mountain range in neighbouring France is traditionally one of Touratech's favourite regions when new accessories are to be subjected to a final test ride. And this is not only because they are within easy reach of the Black Forest on the other side of the Upper Rhine Graben. The special charm of the region is the contrast between valleys with picturesque, winding half-timbered villages and the rugged beauty of the higher altitude areas. 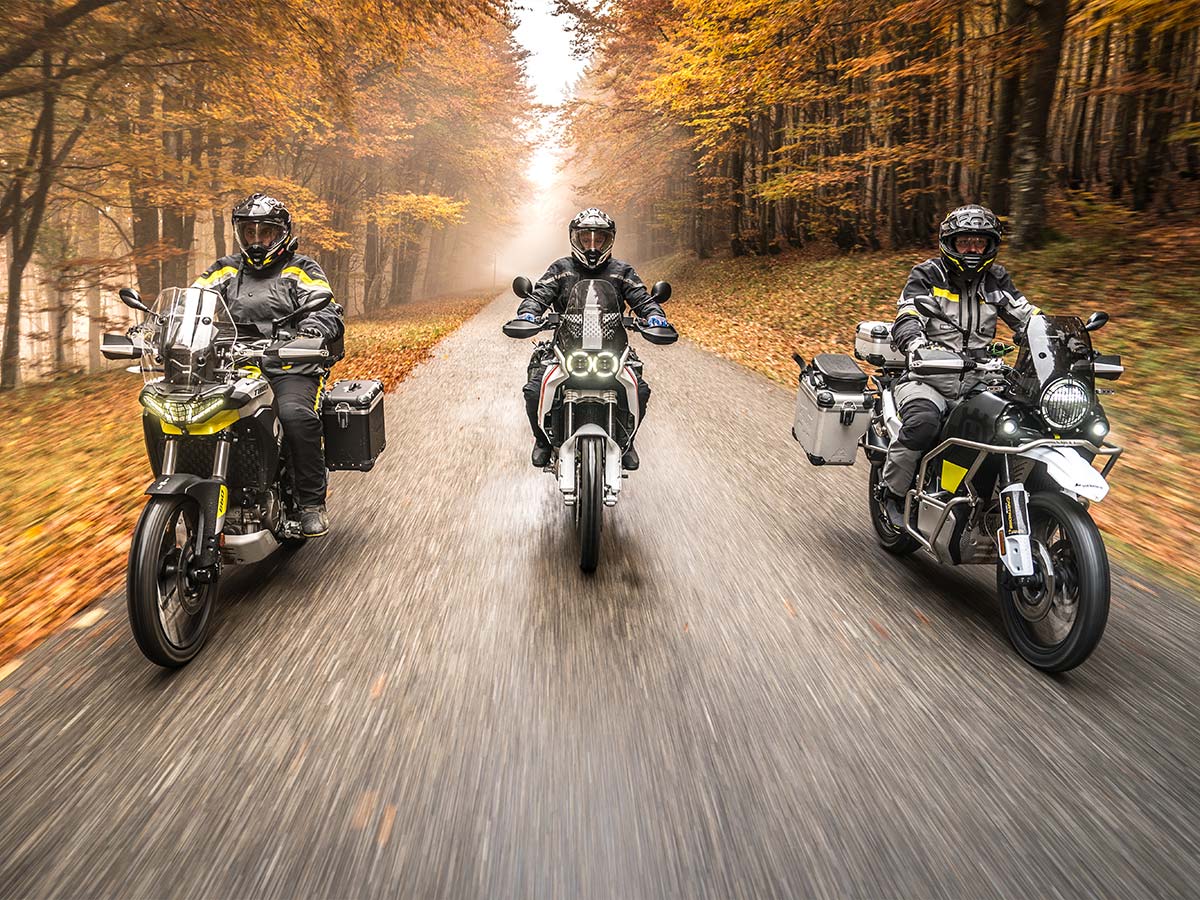 A detour on the "Route des Crêtes", one of the most impressive mountain roads in France, is a must on our tour. It runs along the main ridge of the southern Vosges Mountains almost entirely at an altitude of 1200 metres. The route stretches over approximately 75 kilometres from the Col du Bonhomme in the north via the Col de la Schlucht, Hohneck, Markstein, Grand Ballon and Cernay to Thann in the south. 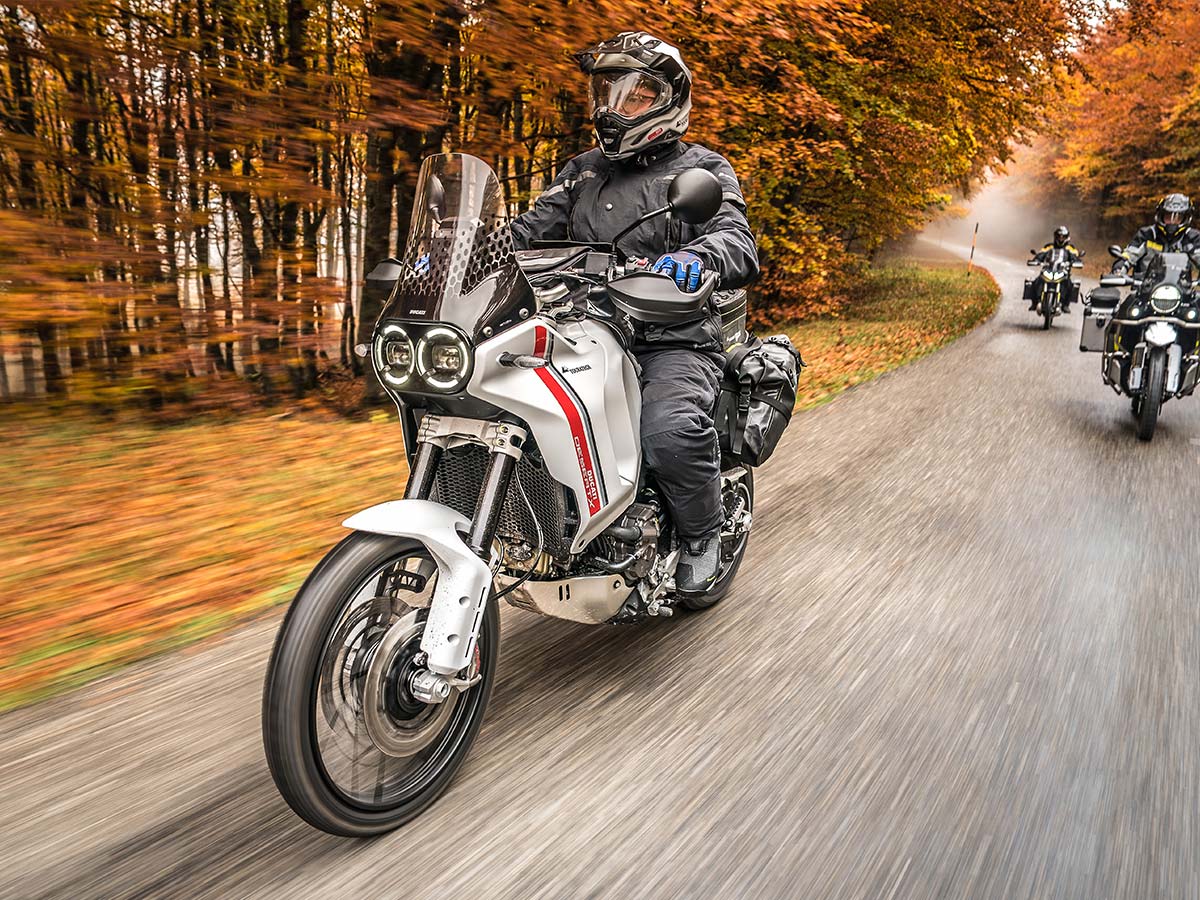 Deciduous and mixed forests line the winding road. On a clear day, there are magnificent views of the Rhine plain and the Black Forest opposite. With a bit of luck, you can also see the Alps.

The road surface is very variable. From well paved, wide roads to unpaved agricultural tracks, there's nothing your wheels won't come in contact with. Due to the often snowy winters, many of the routes in the Vosges Mountains are repeatedly patched up with tar and bitumen.

This is where the adventure bikes, partly equipped with standard material and partly with suspension components from Touratech Suspension, can prove their strengths. 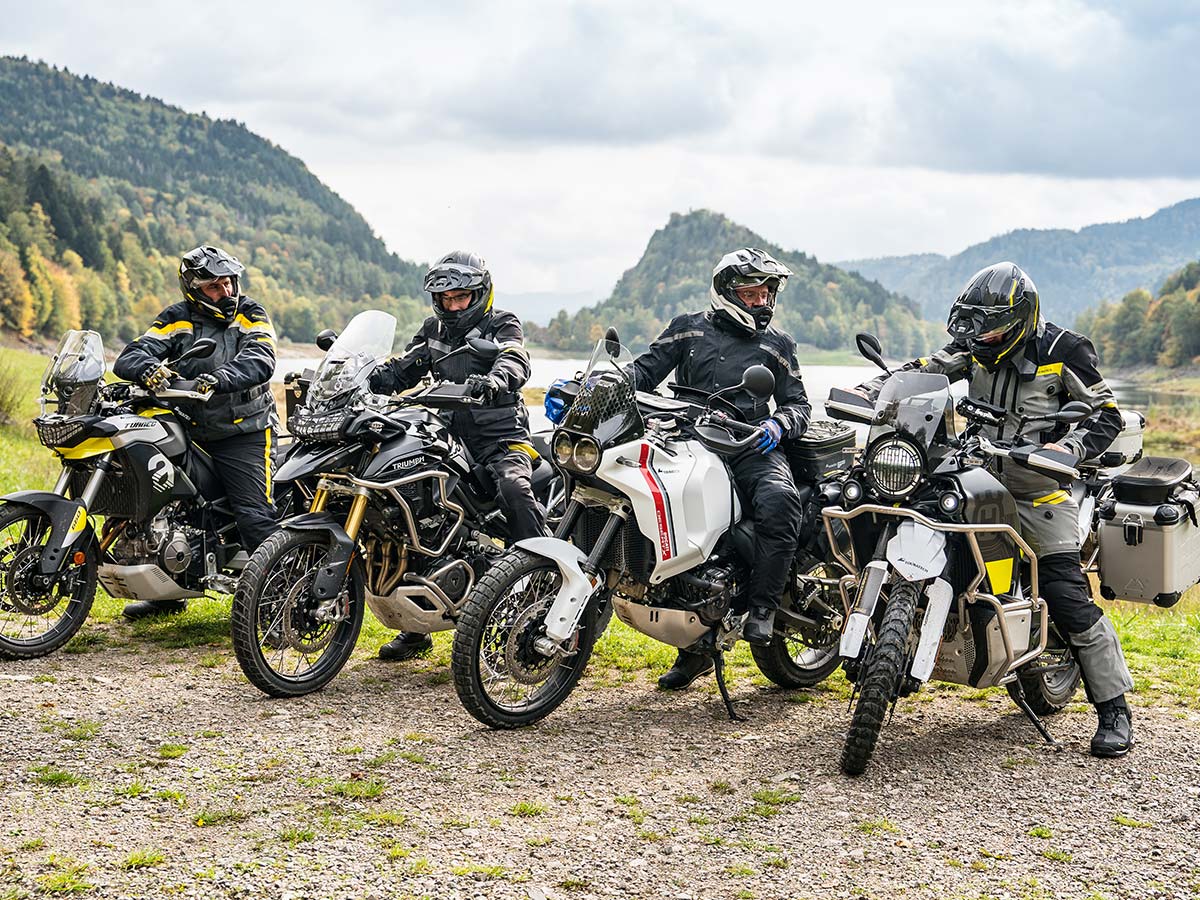 As autumn not only shows its golden side during our tour, but also conjures up mighty banks of fog, the test riders are glad to have the perfect clothing. Some of the team are wearing the Compañero Rambler laminate suit; the others are fitted out with the Compañero Traveller – with the foul-weather suit, "Weather Traveller," made of waterproof and windproof Gore-Tex three-layer laminate on top, of course. It almost goes without saying that their feet are going to stay dry and warm, because the whole troop is equipped with Destino Ultimate GTX boots. 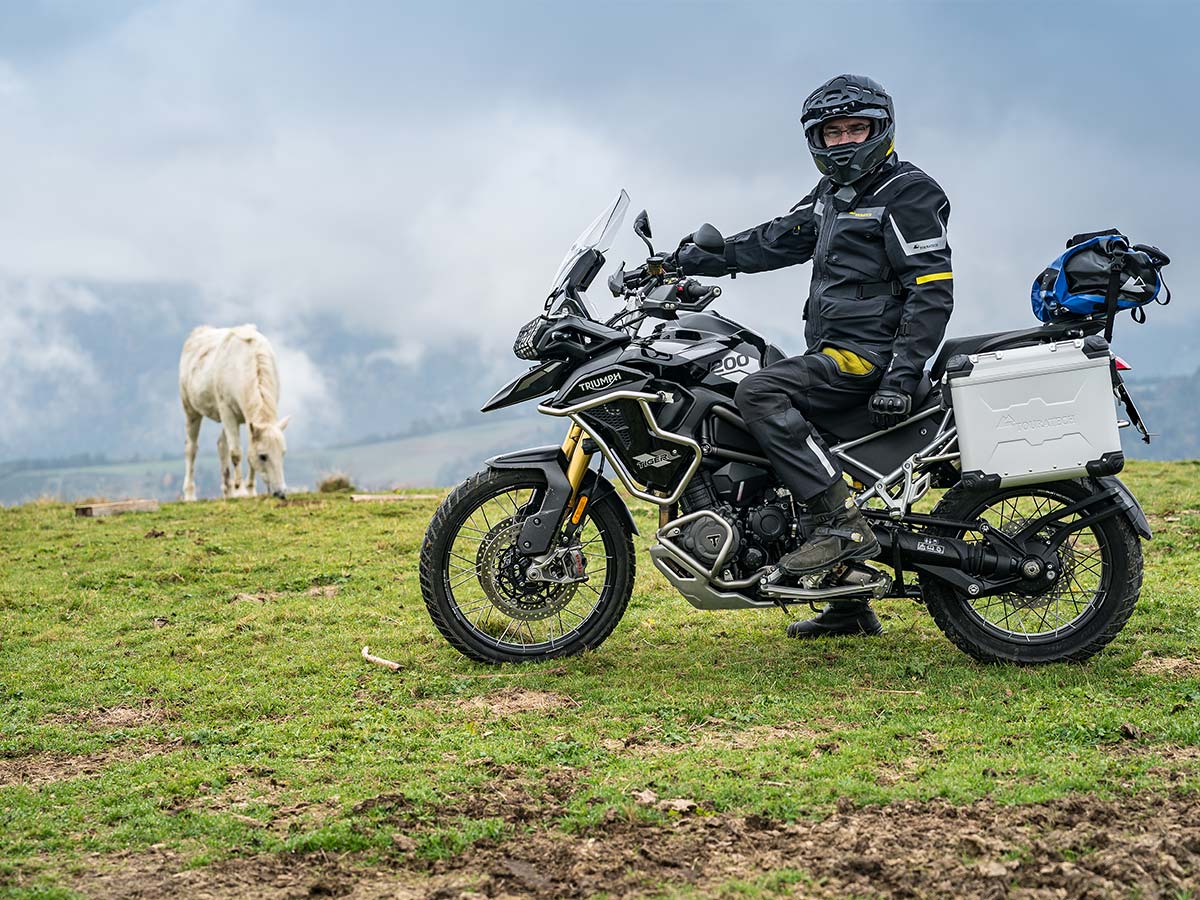 Test drives and photo shoots fortunately leave us just enough time to enjoy the culinary delights of the Vosges in addition to the riding delights. Along the magnificent routes, there are many of those typical Alsatian mountain inns, the "Fermes Auberges". Here, motorcycle travellers find affordable accommodation as well as a good range of regional specialities. In addition to hearty meals and cheeses typical of the area, the famous blueberry cake – tarte myrtille – is a delicacy not to be missed. 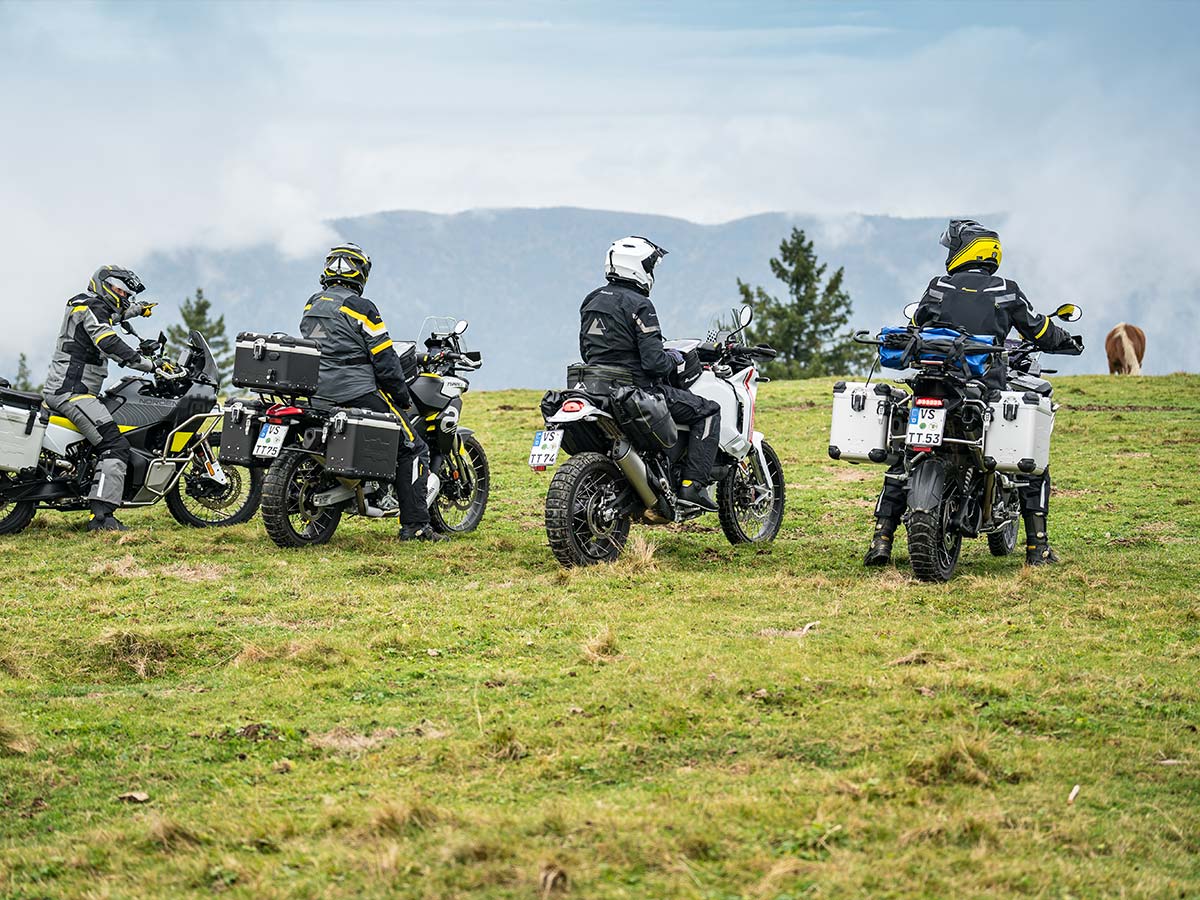 At Le Markstein, we take the opportunity to relax and allow ourselves to be won over by the regional cuisine in the cosy restaurant, "1183 Table de Caractère".

Statements on the motorbikes used

"I found the Husqvarna 901 Norden convincing in every situation, whether on narrow, winding village roads, gravel paths or through nippy passages. We'd upgraded the suspension with components from Touratech Suspension. This made the handling of the Norden even more precise and it convinced me with its exact feedback." 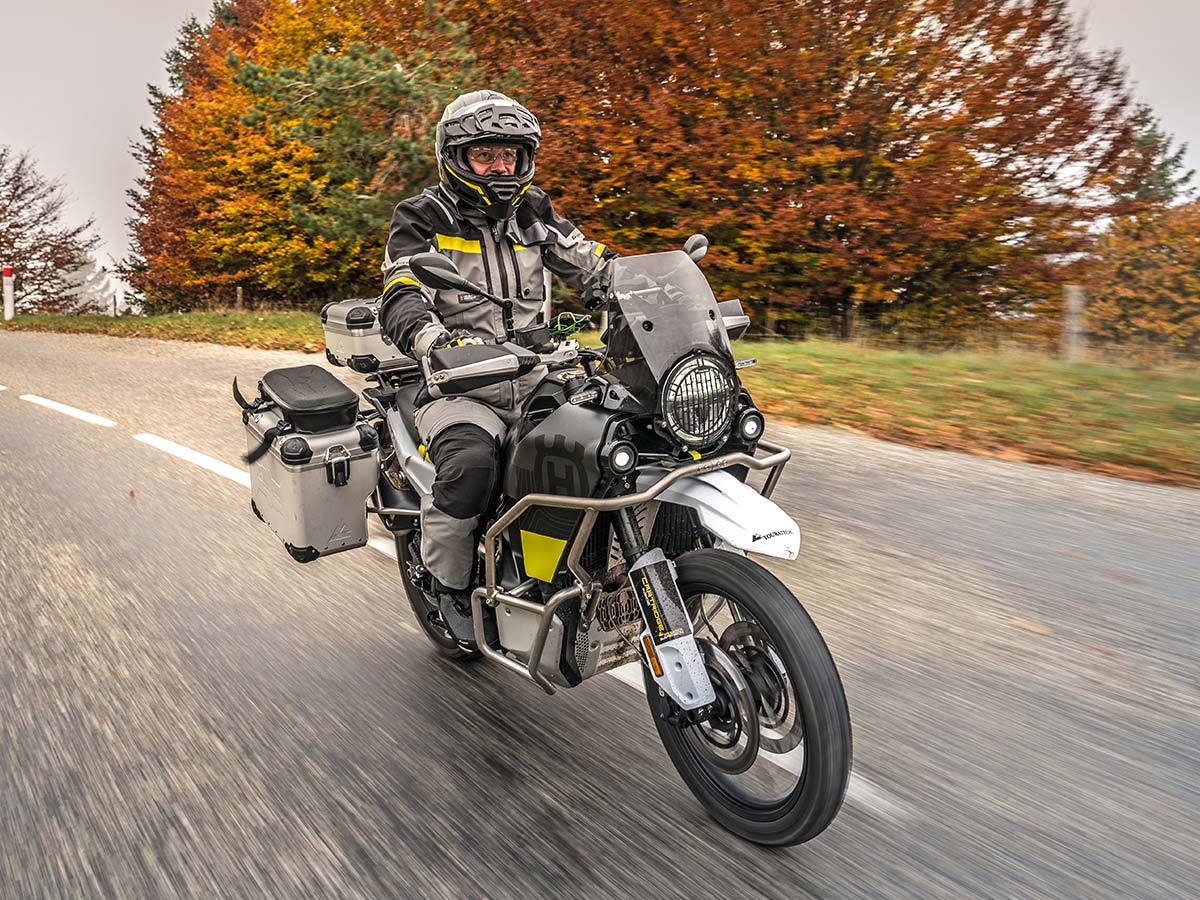 "I was positively surprised by the Aprilia Tuareg 660. It's a machine in which you very quickly gain confidence, and leaning into the bends is child's play. The agile two-cylinder wants to be ridden actively. The suspension was already well tuned in the standard setting. However, my feeling is that the "Offroad" setting is not optimal for gravel passages. I got along much better with the Explore mode. The Tuareg is an all-round great bike that should provide a wide range of rider personalities with positive experiences." 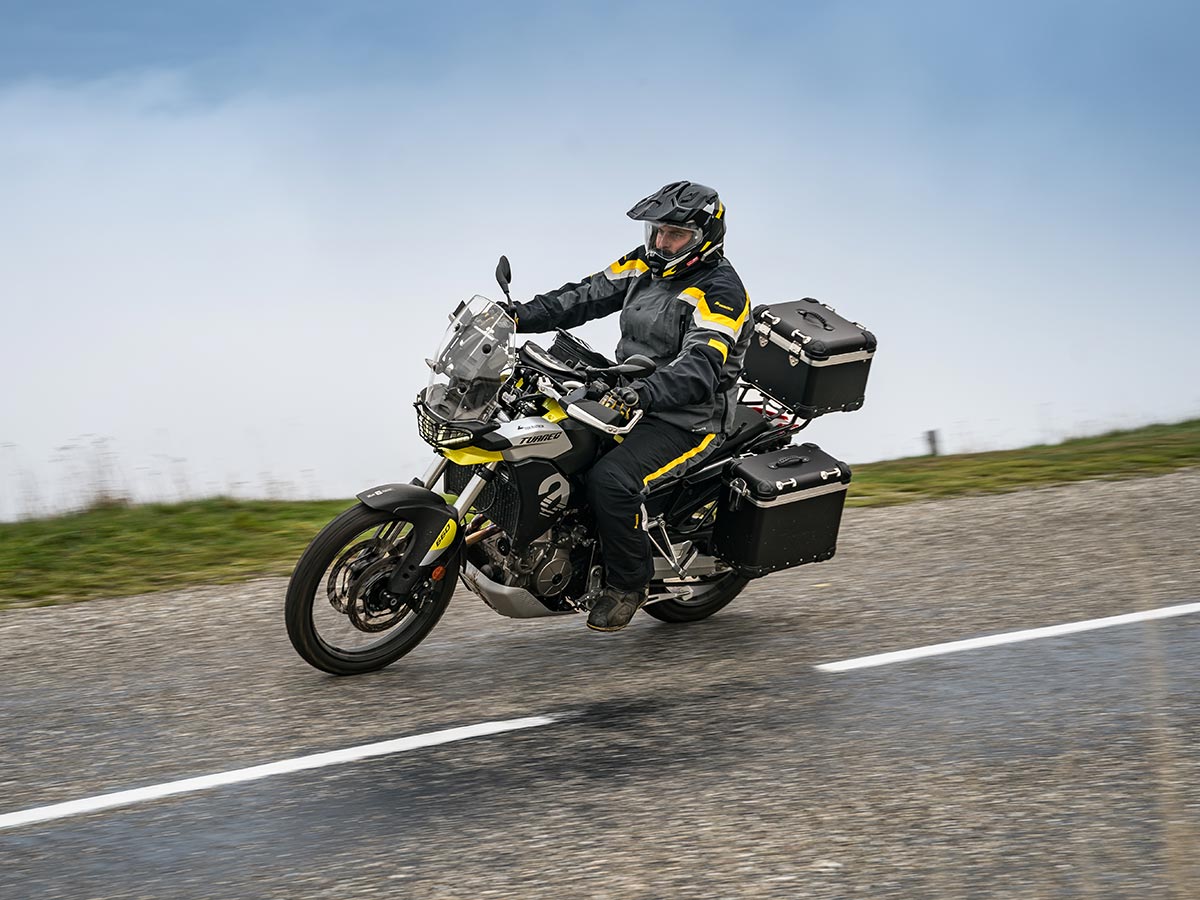 "The Triumph Tiger 1200 impressed me. It has a comfortable seating position (even with a pillion passenger) and great handling characteristics. The engine is enormously powerful and smooth. Despite its weight, this machine is surprisingly easy to handle. I found the way the numerous presets are executed somewhat annoying. The many buttons on the left-hand control unit tend to distract you from what's happening on the road. The bottom line is that the Triumph Tiger 1200 is a great adventure bike that is the right choice for everything from solo tours to big trips with a pillion passenger and lots of luggage." 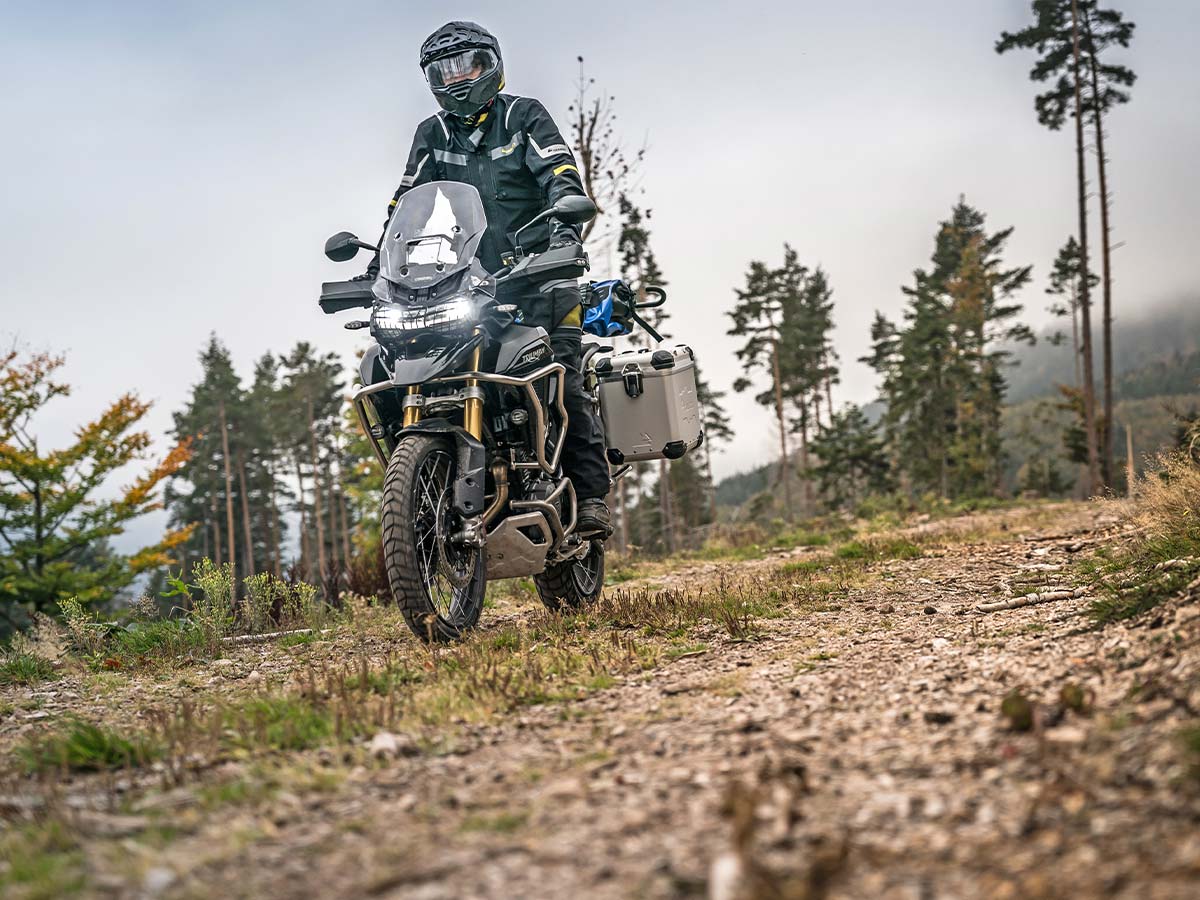 "The Ducati DesertX is not as hefty live as it often appears in photos. With its white dress and classic double headlight, it comes across as simple and elegant. Visually, it reminds me of the machines from the classic era of adventure bikes at the end of the 80s and beginning of the 90s. Technically, however, the Ducati is state-of-the-art. The powerful V-twin impresses me with its sensitive throttle response, and after a few metres I've become completely familiar with the vehicle. I haven't ridden a more coherent bike in a long time." 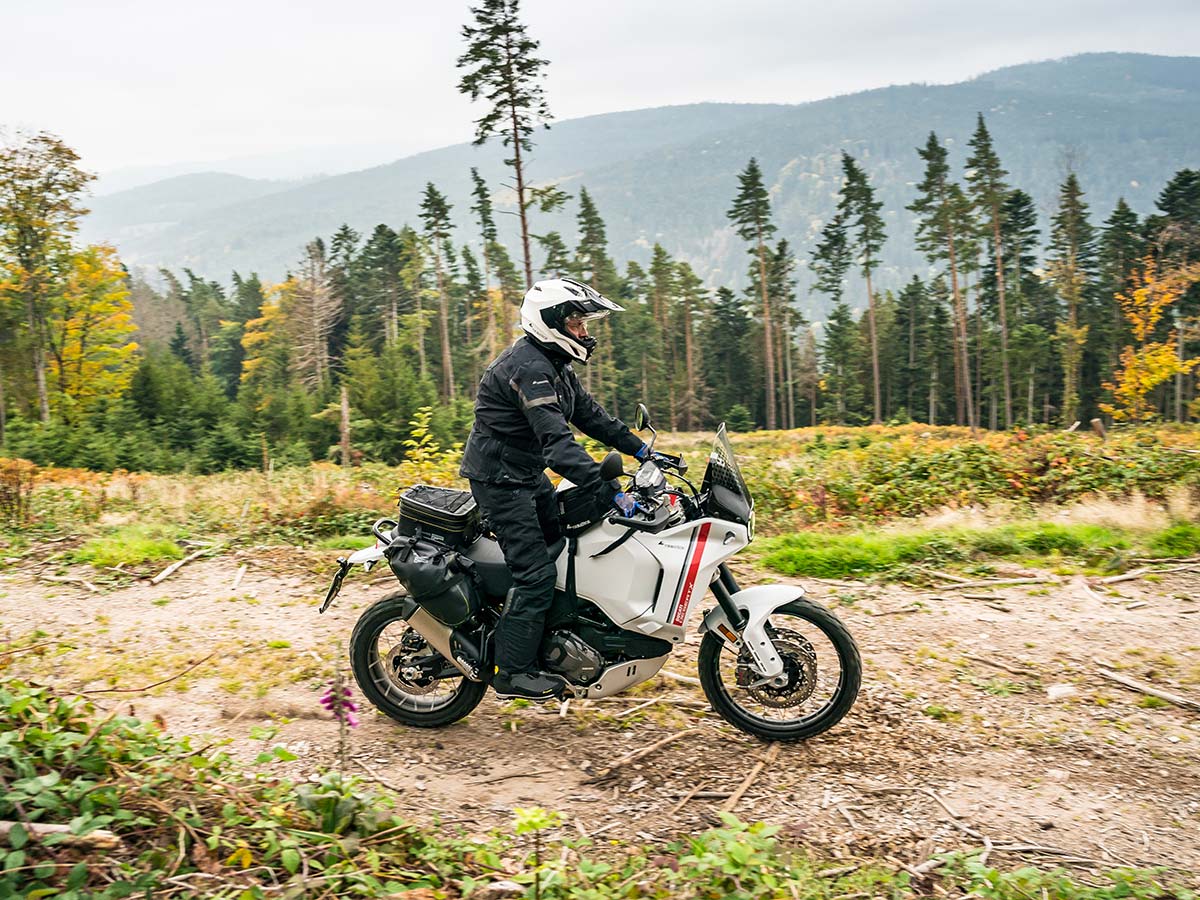